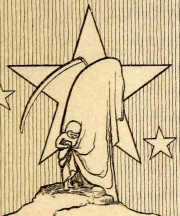 Baby clinging to the cloak of Father Time

New Year is the time at which a new calendar year begins. In the Gregorian calendar (the one used worldwide today) it falls on January 1. The month of January ("Ianuarius" or "Januarius") was the first of the year in the ancient Roman calendar since King Numa Pompilius in about 700 BC. Ianuarius is conventionally thought to have taken its name from Janus, the dual-faced god of beginnings, openings, passages, gates and doorways, but according to ancient Roman farmers' almanacs Juno was the tutelary deity of the month.[1] During the Middle Ages under the influence of the Christian Church, many countries moved the start of the year to one of several important Christian festivals. Between the 1500's to the 1700's January 1 became the official start of the year in most European countries.[2]

In the Theosophical view, the time of the new year coincides with a season in which the subtle energies of the Earth begin to grow stronger at the end of December, following the Winter Solstice.

The New Year is traditionally seen as a new beginning. Different cultures and religions have special ceremonies to celebrate the passing from the old to the new cycle. Among the traditional customs for this transition is to review the developments that took place in the year that is ending. H. P. Blavatsky supported this attitude, although she warned about the danger of dwelling excessively in the past. The aim of the review is to learn the lessons we can draw from past actions to then turn our face towards the new year ahead:

Let it [the old year] go, with its joys and triumphs, its badness and bitterness, if it but leave behind for our instruction the memory of our experience and the lesson of our mistakes. Wise is he who lets "the dead Past bury its dead", and turns with courage to meet the fresher duties of the New Year; only the weak and foolish bemoan the irrevocable.[3]

Although the beginning of new year may seem to be just a conventional date, in the Theosophical view the last days of December mark the start of a cycle in which the subtle energies of the planet are more powerful. Therefore, the resolutions made by the earnest aspirant at this time may find additional strength for its fulfillment:

Let no one imagine that it is a mere fancy, the attaching of importance to the birth of the year. The earth passes through its definite phases and man with it; and as a day can be coloured so can a year. The astral life of the earth is young and strong between Christmas and Easter. Those who form their wishes now will have added strength to fulfil them consistently.[4]

These energies can be manipulated by a person due to the presence of the powers of thought and will in him, and according to how he uses them will be the karmic result brought about. The earnest spiritual seeker, aware of these facts, is careful not to use these energies in a selfish way. Instead, he can take advantage of this time not only to gain spiritual strength but also to send blessings to others:

According to our theosophical tenets, every man or woman is endowed, more or less, with a magnetic potentiality, which when helped by a sincere, and especially by an intense and indomitable will—is the most effective of magic levers placed by Nature in human hands—for woe as for weal. Let us then, Theosophists, use that will to send a sincere greeting and a wish of good luck for the New Year to every living creature under the sun—enemies and relentless traducers included. Let us try and feel especially kindly and forgiving to our foes and persecutors, honest or dishonest, lest some of us should send unconsciously an "evil eye" greeting instead of a blessing.[5] 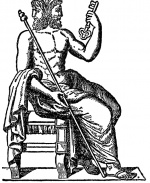 The word "January" comes from Ianuarius or Januarius, which derives from "Janus", the Roman god of gates and doors (ianua), the ruler of beginnings and endings. It is depicted with two faces, one turned to the East and the other to the West, representing the past and the future, and the ever revolving cycle.[6]

The ancient Roman farmers' almanacs place Juno as the tutelary deity of the month. However, according to Mme. Blavatsky, "the first of Januarius was ever more sacred to Janus than Juno.[7] She added:

The statue of Janus-January carried engraved on his right hand the number 300, and on his left, 65, the number of the days in the Solar year; in one hand a sceptre, in the other a key, whence his name Janitor, the door-keeper of the Heavens, who opened the gates of the year at its beginning. Old Roman coins represent Janus bifrons on one side, and a ship on the other. Have we not the right to see in him the prototype of Peter, the fisherman of the celestial ship, the Janitor of Paradise, to the gates of which he alone holds the keys? . . . In Occultism the potency and significance of Numbers and Numerals lie in their right application and permutation. If we have to propitiate any mysterious number at all, we have most decidedly to address Janus-Peter, in his relation to the ONE—the Sun.[8]

When taking into account the gods that were assigned to each day by ancient philosophies, Mme. Blavatsky stated that there were other days in January which would be a better to choice for the beginning of the year from a spiritual point of view:

Only we, theosophists . . . would prefer another day for our New Year. Like the apostate Emperor, many of us have still a strong lingering love for the poetical, bright gods of Olympus and would willingly repudiate the double-faced Thessalonian. January 3, for instance, was consecrated to Minerva-Athênê, the goddess of wisdom and to Isis, "she who generates life".[9]

Besides being related to the goddess of wisdom, January 3 "was also set apart as the day on which the deities of Olympus visited their worshippers".[10] However, when choosing a day that could be regarded as a "Theosophical" new year, Mme. Blavatsky chose January 4:

To be brief, it is January the 4th which ought to be selected by the Theosophists—the Esotericists especially—as their New Year. January is under the sign of Capricornus, the mysterious Makara of the Hindu mystics—the "Kumaras", it being stated, having incarnated in mankind under the 10th sign of the Zodiac. For ages the 4th of January has been sacred to Mercury-Budha, or Thoth-Hermes. Thus everything combines to make of it a festival to be held by those who study ancient Wisdom. Whether called Budh or Budhi by its Aryan name, Mercurios, the son of Caelus and Hecate truly, or of the divine (white) and infernal (black) magic by its Hellenic, or again Hermes or Thoth, its Greco-Egyptian name, the day seems in every way more appropriate for us than January 1, the day of Janus, the double-faced “god of the time”-servers.[11]

Mme. Blavatsky's suggestion of January 3 and January 4 as better choices for the new year is related to a natural phenomenon called "Perihelion". The perihelion is the point in the elliptical orbit of a planet, asteroid or comet where it is nearest to the sun. The Earth comes closest to the sun every year around January 3 and 4 (the date varies, and some years this may happen on the 2nd or the 5th of January).