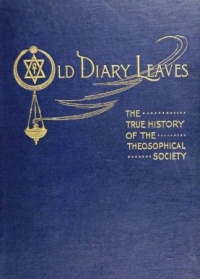 Old Diary Leaves is a series of six volumes of extracts from the diaries of Henry Steel Olcott, President-Founder of the Theosophical Society. This material was originally selected by Colonel Olcott and published in issues of The Theosophist. Much of the early history of the Society is known mainly through Olcott's colorful and detailed records. 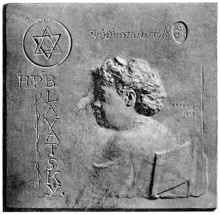 The first volume of the series was printed in 1895 as Old Diary Leaves: The True History of The Theosophical Society in New York and London by G. P. Putnam's Sons, and in Madras by "The Proprietors of The Theosophist." The frontispiece of the book was an image of the bronze medallion depicting Helena Petrovna Blavatsky, created by her friend William R. O'Donovan. The volume covers the period from the meeting of Madame Blavatsky and Colonel Olcott in 1874 until their departure from New York for Bombay in December, 1878.

The second volume of the series was printed in 1900 by the Theosophical Publishing Society in London and The Theosophist office in Madras, India. The subtitle was changed to "The Only Authentic History of The Theosophical Society." This is an account of Olcott's travels with Blavatsky in India and Ceylon; the formation of branches; lecture tours; magnetic healings; and occult phenomena produced by H.P.B. until the autumn of 1883.

The third volume of the series was printed in 1904 by the Theosophical Publishing Society in London and The Theosophist office in Madras, India, with the subtitle "The Only Authentic History of The Theosophical Society." Olcott wrote of this volume:

At this time we take up the thread of narrative, and go forward to the month of May, 1887... Accounts are given among other things of my meetings with several of the "Masters" in the course of my travels, and of the results of the same, of our removal of the Society's Headquarters from Bombay to Madras, of H.P.B.'s last departure from her beloved Indian home into the exile of an European residence. The troublous times of the Coulomb conspiracy are dealt with in this volume, and the true story of the S.P.R. Report is placed on record, so that each member of our world-wide organisation may be via OLD DIARY LEAVES in a position to refute the slanders which, even at this date, echo in some quarters round the name of Mme. Blavatsky. The building and formal installation of the Adyar Library, with ceremonies of an unprecedented character... are described, and numberless details of the growth of the Theosophical movement, and of our Society in particular, are given. The story takes us to Europe as well as through Eastern lands, the intelligent reader being afforded the chance of watching the gradual outworking of the plan of the unseen Founders, whom, their visible agents know to be at work through this channel in spreading throughout the world a knowledge of the principles which were taught by the Ancient Sages, and the general understanding and adoption of which would cure most of the evils which now afflict mankind.

It is six years since the Third Series of Old Diary Leaves appeared in book form, and it is nine years since the contents of the present Volume were published in the pages of The Theosophist. The author, Henry Steel Olcott, passed over in 1907, and as all who knew him well are aware, the publication of the whole of this 'true history of the Theosophical Society' was a matter that lay near his heart. There still remains sufficient material to fill one, if not two, additional Volumes, and it is hoped this will appear in due course, for the longer the lapse of time that separates the present membership of the Theosophical Society from its early history, the more important it is that the facts should be placed on record.

The volume before us deals with some five years during which the writer travelled all round the world, visiting Japan twice, Europe twice, Ceylon several times; Australia, America, Burma each once, besides, making long lecturing tours in India. These were years which saw the advent of Mrs. Besant to the Theosophical Society, and witnessed the death of Madame Blavatsky, and of her learned Hindu colleague, T. Subba Row. Work on behalf of Buddhist Unity occupied much of the writer's time and energy in his Eastern travels, while, in the West, he devoted a good deal of attention to the study of hypnotism, both in Paris and Nancy.

The fifth volume of the series was issued in 1932 by the Theosophical Publishing House in Adyar, Madras, India, with a reprint in 1975. Olcott wrote of this period:

The year 1893 now opens up before us, and its events will be found to be very important. As previously shown, the rumblings of the coming tempest about Mr. William Quan Judge (1851 – 1896) were beginning to be heard. Towards the end of the year the arrival of Mr. Walter G. Old of the London staff, with the budget of notes and memoranda, which he had taken, enabled me by comparing documents to see the depth and fullness of treachery, which Mr. Judge had long been planning. I find from my Diary of 1893 that the greater part of the first day was spent by Messrs, Keightley, Old and myself in summarising the evidence in the case; and needless to say, all our hearts were filled with sorrow, for this was almost if not the very first case of downright perfidy in our Society’s history.

The final volume of the series was issued in 1935 by the Theosophical Publishing House in Adyar, Madras, India, with a reprint in 1975. These diaries get into the period when Olcott was rebuilding the Society after the traumatic events of 1874-75.

The original diaries are in the archives of the headquarters of the Theosophical Society based in Adyar, Chennai, India. The manuscripts were microfilmed in the 1960s and are available at several Theosophical libraries, including the Henry S. Olcott Memorial Library.