From Theosophy Wiki
(Redirected from Phenomenon)
Jump to: navigation, search

Phenomena is the plural of the Greek word phenomenon (φαινόμενoν), and refers to any occurrence that is observable. The term came into its modern philosophical usage through Immanuel Kant, who contrasted it with noumenon, the "thing-in-itself" that is not directly accessible to observation.

In Theosophical literature the word is often applied with the meaning of "appearances" or "illusion", in a similar sense to the Hindu concept of maya.

A second usage is related to psychic and occult manifestations which, though regarded as "miracles" by the masses, are in reality "manifestations of natural law".[1] H. P. Blavatsky qualifies the different kinds of phenomena with several adjectives such as "physical", "psychic", "mental", "occult", and "spiritual". 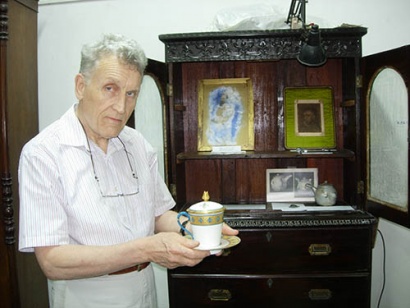 All "phenomena" are but manifestations of natural law, to try to comprehend which is the duty of every intelligent being.[2]

This kind of phenomena are produced through the will-power of the occultist:

Occult manifestations are produced by the will of the Occultist, that one or a hundred men should see realities, generally hidden from the profane, e.g., certain things and persons thousands of miles away, whose astral images are brought within the view of the audience.[3]

Mme. Blavatsky produced a number of phenomena - rarely taking the credit for them, but using them to prove the powers of the Masters of Wisdom. This eventually generated problems, as Mahatma K. H. described to Mr. Sinnett in one of his letters:

Know then, that if she ever became guilty of real, deliberate deception, owing to that "zeal," it was when in the presence of phenomena produced, she kept constantly denying — except in the matter of such trifles as bells and raps — that she had anything to do with their production personally. From your "European standpoint" it is downright deception, a big thundering lie; from our Asiatic standpoint, though an imprudent, blamable zeal, an untruthful exaggeration, or what a Yankee would call "a blazing cock-a-hoop" meant for the benefit of the "Brothers", — Yet withal, if we look into the motive — a sublime, self-denying, noble and meritorious — not dishonest — zeal. Yes; in that, and in that alone, she became constantly guilty of deceiving her friends. She could never be made to realize the utter uselessness, the danger of such a zeal; and how mistaken she was in her notions that she was adding to our glory, whereas, by attributing to us very often phenomena of the most childish nature, she but lowered us in the public estimation and sanctioned the claim of her enemies that she was "but a medium"! But it was of no use. In accordance with our rules, M. was not permitted to forbid her such a course, in so many words. She had to be allowed full and entire freedom of action, the liberty of creating causes that became in due course of time her scourge, her public pillory. He could at best forbid her producing phenomena, and to this last extremity he resorted as often as he could, to her friends and theosophists great dissatisfaction. [. . .] The stereotyped phrase: "It is not I; I can do nothing by myself. . . it is all they — the Brothers. . . . I am but their humble and devoted slave and instrument" is a downright fib. She can and did produce phenomena, owing to her natural powers combined with several long years of regular training and her phenomena are sometimes better, more wonderful and far more perfect than those of some high, initiated chelas, whom she surpasses in artistic taste and purely Western appreciation of art. . . . Thus, while fathering upon us all manner of foolish, often clumsy and suspected phenomena, she has most undeniably been helping us in many instances; saving us sometimes as much as two-thirds of the power used, and when remonstrated — for often we are unable to prevent her doing it on her end of the line — answering that she had no need of it, and that her only joy was to be of some use to us. And thus she kept on killing herself inch by inch, ready to give — for our benefit and glory, as she thought — her life-blood drop by drop, and yet invariably denying before witnesses that she had anything to do with it. Would you call this sublime, albeit foolish self-abnegation — "dishonest"? We do not; nor shall we ever consent to regard it in such a light.[4]

Many of the physical phenomena were related to spiritualistic occurrences such as raps, materializations, etc.

As a rule, physical phenomena are produced by the nature-spirits, of their own motion and to please their own fancy, still good disembodied human spirits, under exceptional circumstances, such as the aspiration of a pure heart or the occurrence of some favoring emergency, can manifest their presence by any of the phenomena except personal materialization.[5]

But, while it is our firm belief that most of the physical manifestations, i.e., those which neither need nor show intelligence nor great discrimination, are produced mechanically by the scin-lecca (double) of the medium, as a person in sound sleep will when apparently awake do things of which he will retain no remembrance. The purely subjective phenomena are but in a very small proportion of cases due to the action of the personal astral body. They are mostly, and according to the moral, intellectual, and physical purity of the medium, the work of either the elementary, or sometimes very pure human spirits. Elementals have naught to do with subjective manifestations. In rare cases it is the divine spirit of the medium himself that guides and produces them.[6]

Consequences of their production

The production of phenomena is not without a price. It involves the use of elementals, altering the natural balance, and needing the use of an important amount of energy:

The production of phenomena is not possible without either the aid or disturbance of elementals. Each phenomenon entails the expenditure of great force, and also brings on a correspondingly great disturbance in the elemental world, which disturbance is beyond the limit natural to ordinary human life. It then follows that, as soon as the phenomenon is completed, the disturbance occasioned begins to be compensated for. The elementals are in greatly excited motion, and precipitate themselves in various directions. They are not able to affect those who are protected. But they are able, or rather it is possible for them, to enter into the sphere of unprotected persons, and especially those persons who are engaged in the study of occultism. And then they become agents in concentrating the karma of those persons, producing troubles and disasters often, or other difficulties which otherwise might have been so spread over a period of time as to be not counted more than the ordinary vicissitudes of life. This will go to explain the meaning of the statement that an Adept will not do a phenomenon unless he sees the desire in the mind of another lower or higher Adept or student; for then there is a sympathetic relation established, and also a tacit acceptance of the consequences which may ensue. It will also help to understand the peculiar reluctance often of some persons, who can perform phenomena, to produce them in cases where we may think their production would be beneficial; and also why they are never done in order to compass worldly ends, as is natural for worldly people to suppose might be done,—such as procuring money, transferring objects, influencing minds, and so on.[7]

The display of phenomena was reluctantly allowed by the Masters. One of them wrote to Mr. Sinnett that the production of "real, genuine phenomena" had brought them "well nigh into the Chohan's disgrace".[8] In spite of the Masters' reticence and the negative effects their production had on her health, Mme. Blavatsky insisted that this was promoting the cause of the Masters. As Mahatma K.H. wrote in one of his letters:

And thus she kept on killing herself inch by inch, ready to give — for our benefit and glory, as she thought — her life-blood drop by drop.[9]

Attitude of the Masters

Although some of the Masters of Wisdom helped in the production of phenomena, they were not in favor of them. Master K.H. wrote to A. P. Sinnett:

I cannot control a feeling of repugnance to going into particulars about this, that, and the other phenomenon that may have occurred. They are the playthings of the tyro and if we sometimes have gratified the craving for them (as in Mr. Olcott's and in a lesser degree your own case at the beginning, since we knew what good spiritual growth would come of it) we do not feel called upon to be continually explaining away deceptive appearances, due to mixed carelessness and credulity, or blind skepticism, as the case may be.[10]

These are some examples of phenomena:

William Quan Judge wrote about phenomena he witnessed in Madame Blavatsky's Occult Phenomena. Henry Steel Olcott wrote of many incidents in his diaries, and his Mrs. Isabelle Mitchell wrote of some striking examples in her article about "Madame Blavatsky."[11]