The Theosophical University Press has been publishing Theosophical classics for many decades as the successor to Aryan Theosophical Press. It is affiliated with the Theosophical Society based in Pasadena, California, with a catalog available online. Many works have been made freely available as full-text editions online.

The website for the press gives its history in these words:

In April 1886, eleven years after the founding of The Theosophical Society in New York City, William Q. Judge began publication of The Path magazine. Three years later a printing press was purchased for the production of additional magazines, books, and pamphlets and, shortly before he died in March 1896, Judge renamed the facility Theosophical Publishing Company. In 1900, his successor, Katherine Tingley, transferred the Society's world headquarters and its publishing operations from New York to Point Loma, California, where a school, academy, and college were established. New printing equipment was purchased and, under the guidance of European and American printers and artists, high quality books, monographs, and magazines in English and other languages were issued, including unabridged reprints of Isis Unveiled (1906) and The Secret Doctrine (1909).

In 1919 Katherine Tingley founded Theosophical University and ten years later, under G. de Purucker's direction, the Society's publishing activity acquired its present name. During World War II, the International Headquarters of the Theosophical Society and its publishing facility were moved to Covina, California and in 1950-51 were moved to the Pasadena area. Today, modernly equipped, TUP maintains the objectives and standards of production established over one hundred years ago: publication of theosophical literature.[1] 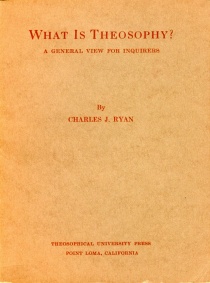 A series of fifteen handbooks were published starting in the 1930s, in a paperback format 4.5 by 5.75 inches, for a cost of 25¢ each, or a boxed set for $3.50. As the publishing house moved from Point Loma to Covina to Pasadena, there were several editions and printings of each volume. These are the titles:

The first volume was an expansion of "Theosophy in Brief Outline," originally printed in 1931.