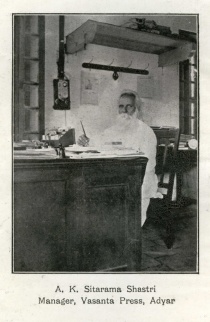 The Vasanţā Press was established at the Theosophical Society in Adyar in 1909. It prints various publications produced by the Theosophical Publishing House (Adyar), the Adyar Library and Research Centre, and allied organizations. The first prize for excellence in printing was awarded to it in 1987 by the All India Printers' Conference.[1]

Annie Besant established the press in 1909 as a private enterprise using equipment imported from England. A. K. Sitarama Sastri was the first manager.[2] Clara Codd described him as "a dear, old Indian member" who had known Madame Blavatsky. "Type was set up under his direction by little boys of twelve, who did not know a word of the language they were printing."[3]

When Mrs. Besant died in 1933 the press and its building became the property of the Theosophical Society. "In 1968 the foundation stone for a new building was laid and this was completed in 1970 and in that year the Press moved into its present quarters."[4] A new printing press was purchased from Germany and was installed in 1975. On June 6, a puja ceremony was held to dedicate the equipment, and a photograph of the occasion was labeled, "A happy gathering at the entrance of the Press to receive the President [John B. S. Coats]. K. R. is enjoying a joke made by the local representative of Heidelburg, Mr. Pradhan and on the the right is Mr. DeSilva who came from Bombay to install the machine."

Publications of the Press

From the beginning, Vasanta Press has served as the principal printing facility for the Theosophical Publishing House in Adyar, and for the everyday needs of the Society, printing everything from books and periodicals to leaflets and lecture flyers. It also printed the publications of the Society for the Promotion of National Education and other ancillary groups.

Here is an example of a folded bookmark from the early history of the press. It features Annie Besant, President of the Society, on the front, a bit of advertising on the back, and a centerfold calendar in an unusual format. The bookmark was sold at a price of one anna.