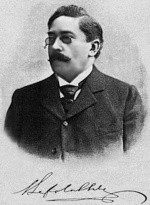 Solovyov met Mme. Blavatsky and other important Theosophists in 1884, and was visited by Master M. He was admitted to the Theosophical Society in France on May 17, 1884.[1]

On February 16, 1886, he resigned his membership in the Theosophical Society and became a bitter and disillusioned enemy of Mme. Blavatsky. He wrote a critical examination of HPB's last three years, called A Modern Priestess of Isis. It was published in 1895 in a translation by Walter Leaf on behalf of the Society for Psychical Research, and claimed to prove that she was an impostor.

Visit by the Master

That evening, he saw the portraits of both Masters, which were in possession of Mme. Blavatsky, and in the night was visited by Master M.:

Tired by the journey, I lay peacefully sleeping when suddenly I was awakened by the sensation of a warm penetrating breath. I open my eyes and in this feeble light that entered the room through the three windows, I see before me a tall figure of a man, dressed in a long white floating garment. At the same time I heard or felt a voice that told me, in I know not what language, although I understood perfectly, to light the candle. I should explain that, far from being afraid, I remained quite tranquil, only I felt my heart beat rapidly. I lit the candle, and in lighting it, saw by my watch that it was two o’clock. The vision did not disappear. There was a living man in front of me. And I recognized instantly the beautiful original of the portrait we had seen during the evening before. He sat down near me on a chair and began to speak. He talked for a long time. Among other things, he told me that in order to be fit to see him in his astral body I had had to undergo much preparation, and that the last lesson had been given me that morning when I saw, with closed eyes, the landscapes that I was to see in reality the same day. Then he said that I possess great magnetic power, now being developed. I asked him what I ought to do with this force. But without answering, he vanished.

I was alone, the door of my room locked. I thought I had had a hallucination and even told myself with fright that I was beginning to lose my mind. Hardly had this idea arisen when once again I saw the superb man in white robes. He shook his head and, smiling, said to me, "Be sure that I am no hallucination and that your reason is not quitting you. Blavatsky will prove to you tomorrow before everyone that my visit is real." Then he disappeared. I saw by my watch that it was three o’clock. I put out the candle and immediately went into a deep sleep.

Next morning, on going with Miss [de Glinka] to Madame Blavatsky, the first thing she said to us with an enigmatical smile was "Well! How have you passed the night?" "Very well," I replied and I added, "Haven't you anything to tell me?" "No," she replied, "I only know that the Master was with you with one of his pupils."

That same evening, Mr. Olcott found in his pocket a little note, that all the Theosophists said was in the handwriting of M: "Certainly I was there, but who can open the eyes of him who will not see."

This was the reply to my doubts, because all the day I had been trying to persuade myself that it was only a hallucination, and this made Madame Blavatsky angry.[2]

H. P. Blavatsky discussed the phenomenal production of a letter in this incident involving Solovyov:

Think only of a case with Solovioff at Elberfeld, I sick in my bed. A letter of his, an old letter received in London and torn up by me, rematerialized in my own sight, I looking at the thing; five or six lines in the Russian language, in Mahatma K. H.'s handwriting in blue, the words taken from my head, the letter old and crumbled travelling slowly alone (even I could not see the astral hand of the chela performing the operation) across the bedroom, then slipping into and among Solovioff's papers, who was writing in the little drawing-room, correcting my manuscripts; Olcott standing closely by him and having just handled the papers, looking over them with Solovioff. the latter finding it, and like a flash I see in his head in Russian the thought: "The old imposter (meaning Olcott) must have put it there!"[3]