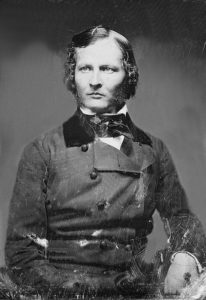 William Pike Phelon was born September 28, 1834 in England to Benjamin and Sarah Phelon. His father was a clergyman. The family, including a brother Benjamin, emigrated to the United States and by 1850 was settled in Rhode Island. William married Ruth Lamira Morse, known as Mira or Myra, who was born in Vermont on April 1, 1831. She was the niece of Samuel Morse, inventor of the telegraph.[1]

The early 1860s found the couple living in Dorr, Illinois, with William working as a printer for a time. In 1862, during the Civil War, Phelon served in a medical role in the 95th lllinois Infantry, but was discharged with a disability.[2][3] A son, William A. Phelon, was born around 1870. In the early 1870s, William and Mira Phelon were employed as school teachers in La Porte, Indiana. In 1874 they moved to Chicago.[4][5] He became established as a physician in the central business district of that city.[6] After his wife Mira died on February 23, 1896 in Chicago, Dr. Phelon moved to San Francisco.[7][8]

He died in San Francisco on December 29, 1904, and his role as head of the Hermetic Brotherhood of Atlantis, Luxor and Elephanta was prominently featured in his obituary.

Both William and Mira became members of the Theosophical Society on November 11, 1884.[9] They were active in the Chicago Branch, of which Dr. Phelon was Corresponding Secretary. It was one of the first Theosophical lodges formed in the United States. The Phelons helped to form the Ramayana Theosophical Society on July 27, 1887.[10] Both Phelons sponsored L. Frank Baum, author of The Wizard of Oz, and his wife Mrs. Maud G. Baum, when they joined the Ramayana branch on September 4, 1892.[11][12]

Dr. Phelon served as president of the Ramayana TS, and its meetings took place at 629 Fulton Street, which also served as the doctor's office, the editorial office of The Hermetist, and business address of the Hermetic Publishing Company. Mira was actively engaged in Theosophical activities as well. She gave lectures at the lodge, such the poetic presentation "A Fragment" given on June 24, 1888.[13] When the American Section of the Theosophical Society held its annual convention in Chicago in 1890, she read a paper called "The Narrow Path."[14]

Dr. Phelon and Mira founded the Hermetic Brotherhood of Atlantis, Luxor and Elephanta around 1875.[15] He headed that organization until his death in 1904. He was also editor of its periodical, The Hermetist, published 1887-1899 in Chicago.

The Phelons also seem to have been members of the similarly named and better-known Hermetic Brotherhood of Luxor that was founded in 1884.

The Union Index of Theosophical Periodicals lists 12 articles by or about the Phelons.