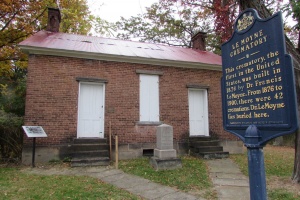 Cremation is an alternative to burial of corpses in which the deceased is reduced to ashes in a furnace or burned on a pyre. Long preferred in the Indian subcontinent, cremation has slowly become accepted in the West. The first person processed in a crematorium in the United States was Theosophist Baron de Palm, on December 6, 1876.

Many Theosophists believe that cremation can aid in the transition of the subtle bodies of the human after death, and that it is more hygienic than the Western traditions of embalming and burial.

Since the last quarter of the 19th century, the practice of cremation has gained acceptance in America and many European countries, whereas in the Orient, especially in India, it has been perhaps the most common way of disposing of dead bodies. Among peoples ancient and contemporary it ranks with other modes of disposal of the dead, such as exposure to the air, burial in the earth, or being devoured by animals. Blavatsky maintains that it was universal until 80,000 or 100,000 years ago (SD 2:753). Some Christians oppose the practice because they believe that the dispersal of the physical body by fire makes it impossible for the soul to regather a body in time to be saved at the Last Judgment, and so leads to annihilation. In our day cremation is favored chiefly for hygienic reasons, as preventing the pollution of the soil and water supply and thus removing causes of infection. Cremation does not destroy even the chemical atoms, much less the life-atoms. It aids the dissolution of the astral body, which is no longer attracted magnetically to the decaying corpse or able to exchange life-atoms with it.[1]

However, Annie Besant recommended that cremation is not done within the first twenty-four hours of the passing, because of the magnetic connection that exists between the physical body and the etheric double, in which consciousness now is:

For a certain time a link remains between the amputated limb and its etheric counterpart, a sort of magnetic rapport between the two. It does not last very long, but while it does last it is possible that the etheric double may feel anything done to the physical part which has been cut off; but only a very short time, and only from particular kinds of injuries. In the ordinary case of cremation the separation would have taken place completely before the burning, if the burning does not occur within twenty-four hours of the death of the gross body. It is necessary to take some means whereby the magnetic link shall be broken before the gross body is burned. In India, for instance, they burn the body very quickly, within a very few hours ordinarily after death. Then certain methods are used to make a complete break between the two so that no possible suffering occurs.[2]

Astral life of the deceased

C. W. Leadbeater explained how cremation can help in the post-mortem process of the soul:

The desirable thing [for a deceased person on the astral plane] is for him to realise his position on this little arc of his evolution--to learn that he is at this stage withdrawing steadily inward towards the plane of the true ego, and that consequently it is his business to disengage his thought as far as may be from things physical, and fix his attention more and more upon those spiritual matters which will occupy him during his life in the heaven-world. By doing this he will greatly facilitate the natural astral disintegration, and will avoid the sadly common mistake of unnecessarily delaying himself upon the lower levels of what should be so temporary a residence.

Many people, however, simply will not turn their thoughts upwards, but spend their time in struggling with all their might to keep in touch with the physical plane which they have left, thus causing great trouble to anyone who may be trying to help them. Earthly matters are the only ones in which they have ever had any living interest, and they cling to them with desperate tenacity even after death. Naturally, as time passes on, they find it increasingly difficult to keep hold of things down here, but instead of welcoming and encouraging this process of gradual refinement and spiritualisation they resist it vigorously by every means in their power. The mighty force of evolution is eventually too strong for them, and they are swept on in its beneficent current, yet they fight every step of the way, thereby not only causing themselves a vast amount of entirely unnecessary pain and sorrow, but also seriously delaying their upward progress.

Now, in this ignorant and disastrous opposition to the cosmic will a man is much assisted by the possession of his physical corpse as a kind of fulcrum on this plane. He is naturally in close rapport with it, and if he is so misguided as to wish to do so, he can use it as an anchor to hold him down firmly to the mud until its decomposition is far advanced. Cremation saves the man from himself in this matter, for, when the physical body has been thus properly disposed of, his boats are literally burned behind him, and his power of holding back is happily greatly diminished.

We see therefore that, while neither the burial nor the embalming of a corpse can in any way force the ego to whom it once belonged to prolong his stay upon the astral plane against his will, either of those causes is a distinct temptation to him to delay, and immensely facilitates his doing so if he should unfortunately wish it. No ego of any advancement would allow himself to be detained upon the astral plane, even by a proceeding so foolish as the embalming of his corpse. Whether his physical vehicle was burned or allowed to decay slowly in the usual loathsome manner, or indefinitely preserved as an Egyptian mummy, his astral body would pursue its own line of quick disintegration entirely unaffected.

Among the many advantages gained by cremation the principal are that it entirely prevents any attempt at partial and unnatural temporary reunion of the principles, or any endeavour to make use of the corpse for the purposes of the lower magic-- to say nothing of the many dangers to the living which are avoided by its adoption.[3]

In Roman Catholic doctrine, the dead are bodily resurrected on the Day of Judgment, so burial has been customary. In 1886, religious and economic penalties were imposed to prevent cremation, but Pope Paul VI lifted the regulations in 1964 without actually approving of the practice.[4]

First Cremation in the United States

Theosophist Baron de Palm was the first person to be cremated in the United States. A symbolic memorial service was held in the Masonic Temple at the corner of 23rd Street and 6th Avenue. The Baron had asked that no clergyman or priest should officiate at his funeral, but that Colonel Olcott should perform the last offices in a fashion that would illustrate the Eastern notions of death and immortality. Col. Olcott wrote in his diary:

The Baron died on May 20, 1876, but the actual cremation did not take place until six months after his death. The body was preserved by using potter’s clay and Phenol. Finally, on December 6, 1876, his body of the Baron was consigned to the furnace of the first American crematorium, owned by Dr. Le Moyne in the small town of Washington, Washington County, Pennsylvania. The ceremony

was open to the public and attended by many, including mourners, journalists, and a few protesters. Some in the audience were poorly behaved but the cremation was successful. His ashes were taken back to New York (although some were gathered as souvenirs, including by LeMoyne himself). The event, and the media frenzy that surrounded it, did little to dispel the public’s dislike of cremation practices.[6]