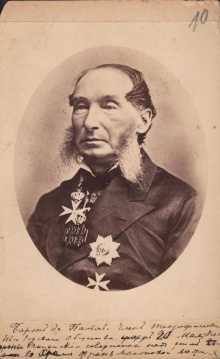 Joseph Henry Louis Charles, Baron de Palm, Grand Cross Commander of the Order of the Holy Sepulchre and Knight of various other orders. He joined the Theosophical Society in its earliest days, and was acquainted with Madame H. P. Blavatsky, William Quan Judge, Henry Steel Olcott, and other Theosophists. He became the first person to be cremated in the United States.

The Baron met Colonel Henry Steel Olcott in New York in December, 1875, bringing an introductory letter from the late Col. Bundy, publisher of the The Religio-Philosophical Journal. He was admitted as a member of the new Theosophical Society on March 8, 1876.[2] On March 29, 1876, he was elected on the Council of the Theosophical Society after the resignation of Rev. J. H. Wiggin.

Finding him a man of engaging manners, evidently familiar with the best society, and professing much interest in spiritualism and a wish to learn something about our Oriental theories, I made him welcome, and at his request introduced him to H. P. B. [Helena Petrovna Blavatsky] The acquaintance was kept up, the Baron joined our Society and, a vacancy occurring soon after' by the resignation of the Rev. J. H. Wiggin, he was elected a Member of Council on the 29th March 1876. As he complained of feeble health, and of having no one in New York who cared whether he lived or died in the wretched boarding-house where he was put up, I invited him to come and occupy a room in my ‘apartment’, looked after his comfort and called in a physician to prescribe for him. Symptoms of pneumonia and nephritis showing themselves and the medical attendant pronouncing him in danger, he got me to send him Mr. Judge, the Society’s Standing Counsel, and executed a Will devising certain parcels of real-estate at Chicago to two lady friends, making me residuary legatee, and appointing Mr. Newton, Treasurer of the T. S., and myself his Executors, with full powers. Under medical advice and at his own earnest request, he was removed to the Roosevelt Hospital on Friday evening, May 19th (1876) and died the next morning. The result of an autopsy was to show that he had for years been suffering from a complication of diseases of the lungs, kidneys and other organs; a medical certificate that he had died of nephritis was given and filed as prescribed by law in the Health Bureau, and the body was conveyed to the receiving-vault of the Lutheran Cemetery pending the completion of arrangements for interment.[3] 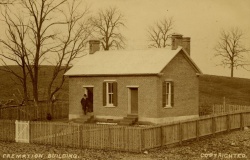