Alaya (devanāgarī: आलय Ālaya) is a Sanskrit word meaning "abode, dwelling." In the Yogacara school of Buddhism it is usually employed in connection with the word vijñāna (consciousness) as ālayavijñāna ("store-house consciousness"). In Theosophy it refers to the sixth universal principle, the universal soul.

The terms anima mundi and over-soul[1] are frequently used as a synonym for ālaya.

What is the belief of the inner esoteric Schools? the reader may ask. What are the doctrines taught on this subject by the Esoteric “Buddhists”? With them “Alaya” has a double and even a triple meaning. In the Yogacharya system of the contemplative Mahayana school, Alaya is both the Universal Soul (Anima Mundi) and the Self of a progressed adept. “He who is strong in the Yoga can introduce at will his Alaya by means of meditation into the true Nature of Existence.” The “Alaya has an absolute eternal existence,” says Aryasanga.[2]

She defined ālaya as follows:

The Universal Soul (See Secret Doctrine Vol. I. pp. 47 et seq.). The name belongs to the Tibetan system of the contemplative Mahâyâna School. Identical with Âkâsa in its mystic sense, and with Mûlaprakriti, in its essence, as it is the basis or root of all things.[3] 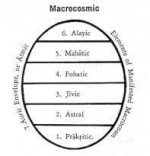 When describing the cosmic planes, Mme. Blavatsky makes ālaya the sixth. In the quote above she says that it is identical with ākāśa (the fifth cosmic principle) "in its mystic sense." Mūlaprakṛti, being ālaya's essence, can be regarded as the seventh cosmic principle. All this on the side of matter or substance.

Mahat, the Universal Mind, is said to be the manvantaric aspect of alaya, the Universal Soul.[4] And just as the sixth and fifth principles in human beings (buddhi and manas) are frequently referred to as working together, we find similar references applied to these cosmic principles, such as the phrases Alaya-Akasha[5] or Alaya-Mahat.[6]

The cosmic Alaya is reflected on the corresponding Prakritic planes, which are within the reach real Yogis:

Alaya, though eternal and changeless in its inner essence on the planes which are unreachable by either men or Cosmic Gods (Dhyani Buddhas), alters during the active life-period with respect to the lower planes, ours included. During that time not only the Dhyani-Buddhas are one with Alaya in Soul and Essence, but even the man strong in the Yoga (mystic meditation) “is able to merge his soul with it” (Aryâsanga, the Bumapa school). This is not Nirvana, but a condition next to it.[7]

In Mme. Blavatsky's writings, man's sixth principle (buddhi) is regarded as "a ray of the Universal Spiritual Soul (Alaya)":[8]

Buddhi stands to the divine Root-Essence in the same relation as Mulaprakriti to Parabrahman, in the Vedânta School; or as Alaya, the Universal Soul, to the One Eternal Spirit, or that which is beyond Spirit.[9]

In mystical treatises such as The Voice of the Silence ālaya is said to be the "Master-Soul", in whom the mystic has to dwell:

Of teachers there are many; the MASTER-SOUL is one, Alaya, the Universal Soul. Live in that MASTER as Its ray in thee. Live in thy fellows as they live in It.[10]

However, although ālaya is in every human being, very few are able to get in touch with it:

Alas, alas, that all men should possess Alaya, be one with the great Soul, and that possessing it, Alaya should so little avail them!
Behold how like the moon, reflected in the tranquil waves, Alaya is reflected by the small and by the great, is mirrored in the tiniest atoms, yet fails to reach the heart of all. Alas, that so few men should profit by the gift, the priceless boon of learning truth, the right perception of existing things, the Knowledge of the non-existent![11]

The difficulty lies in the fact that ālaya can only be reflected in a highly spiritual and passionless mind:

Ālaya, or Nying-po, being the root and basis of all, invisible and incomprehensible to human eye and intellect, it can reflect only its reflection—not Itself. Thus that reflection will be mirrored like the moon in tranquil and clear water only in the passionless Dharmakāya intellect, and will be distorted by the flitting image of everything perceived in a mind that is itself liable to be disturbed.[12]

The ultimate aim of the mystic is "to be able to identify himself with and to merge himself into it".[13]