The Animal Kingdom is the previous evolutionary stage to human beings.

In the Theosophical view, there is a moral responsibility for unnecessarily killing animals by civilized people. As Master K.H. wrote:

As it is no fault of the former, if born a "savage" with an instinct to kill — though it caused the death of many an innocent animal — why, if with it all, he was a loving father, son, husband, why should he not also enjoy his share of reward? The case would be quite different if the same cruel acts had been done by an educated and civilized person, from a mere love of sport. The savage in being reborn would simply take a low place in the scale, by reason of his imperfect moral development; while the Karma of the other would be tainted with moral delinquency.[1]

Large numbers of the higher animals in a state of domestication have... really become separate re-incarnating entities, although not as yet possessing a causal body - ­the mark of what is usually called individualisation. The envelope derived from the Group-Soul serves the purpose of a causal body... Following the analogy of human ante­-natal life, we see that this stage corresponds with its last two months. A seven-months’ babe may be born and may survive, but it will be stronger, healthier, more vigorous, if it profits for yet another two months by its mother’s shielding and nourishing life. So is it better for the normal development of the Ego that it should not too hastily burst the envelope of the Group-Soul, but should still absorb life through it, and strengthen from its constituents the finest part of its own mental body. When that body has reached its limit of growth under these shielded conditions, the envelope disintegrates into the finer molecules of the sub-plane above it, and becomes, as above said, part of the causal body.
It is the knowledge of these facts that has sometimes caused occultists to warn people who are very fond of animals not to be exaggerated in their affection, nor to show it in unwise ways. The growth of the animal may be unhealthily forced, and its birth into individuality be hastened out of due time. Man, in order to fill rightly his place in the world, should seek to under­stand nature and work with her laws, quickening indeed their action by the co-operation of his intelligence, but not quickening it to the point whereat growth is made unhealthy and its product frail and “out of season”. It is true that the Lord of Life seeks human co-opera­tion in the working out of evolution, but the co-operation should follow the lines which His Wisdom has laid down.[2]

C. W. Leadbeater explained the influence of animals as follows

For thousand of years man has lived so cruelly that all wild creatures fear and avoid him, so the influence upon him of the animal kingdom is practically confined to that of the domestic animals. In our relations with these our influence over them is naturally far more potent than theirs over us, yet this latter is by no means to be ignored. A man who has really made friends with an animal is often much helped and strengthened by the affection lavished upon him. Being more advanced, a man is naturally capable of greater love than an animal is; but the animal' s affection is usually more concentrated, and he is far more likely to throw the whole of his energy into it than a man is.
The very fact of the man's higher development gives him a multiplicity of interests, among which his attention is divided; the animal often pours the entire strength of his nature into one channel, and so produces a most powerful effect. The man has a hundred other matters to think about, and the current of his love consequently cannot but be variable; when the dog or the cat develops a really great affection it fills the whole of his life, and he therefore keeps a steady stream of force always playing upon its object--a factor whose value is by no means to be ignored.[3]

Regarding those who are cruel to animals, he added:

Similarly the man who is so wicked as to provoke by cruelty the hatred and fear of domestic animals becomes by a righteous retribution the centre of converging forces of antipathy; for such conduct arouses deep indignation among nature-spirits and other astral and etheric entities, as well as among all right-minded men, whether living or dead.[4] 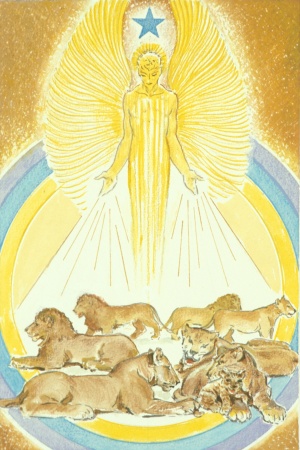 Animal consciousness is not only evolved through individual forms, but through group experience and growth. This group development occurs throughout the third chain, particularly during the seven periods during which the Life wave occupies its Globe D. Animals are united in groups, each animal sharing the soul life of its group...

The group-soul is an admirable conveyance for sharing the collective experience of numbers of animals. A number of lions may be seen linked together in a single sphere of consciousness [in the illustration at right].

Through the common shelter of this immortal group-soul that is experiencing life and death in any forms, there is a constant stimulation of consciousness in all the creatures attached to the group. the sheltering feature of group-soul existence indicates that the animal is not aware of aloneness...

In the illustration the star Monad above is radiating its influence into the sphere through the medium of an angelic presence that represents the immortal group-soul intelligence. This entity is visualized gathering the essential quality of each member's experiences and redistributing it to the whole group...

Thus it may be seen that there is a common influx of spiritual forces from above, in addition to the flow of impacts from all the environmental experiences pouring into the group-soul. Together these unfold the lion's characteristic nature and action...