Similar to the way Christianity emerged from Judaism, the Bahá’í Faith resulted from theological disagreements within Islam.[1] The immediate precursor of the Bahá’í faith was the Babi movement; at least one scholar has called the Babis and Bahá’ís the “Gnostics of Islam.”[2] In December 1844, a young man who became known as “the Bab” (meaning “the Gate”) declared that he was the Hidden Imam the faithful had been awaiting for nearly a thousand years. He also stated that he was merely the predecessor of a greater messenger from God. Although not highly educated, this young man’s dealings in the family business had earned him a reputation for both integrity and ability.[3] [4] [5] [6] Despite the lack of a formal education, the Bab was noted for his “extensive theological commentaries” as well as a social prescription that had in mind a complete overhaul of Shia customs and laws. Among the Bab’s teachings, considered radical by many, was the idea of women’s equality.[7] Having greatly angered the political and religious authorities, he was martyred in 1850;[8] [9] many thousands of his followers had been martyred by then as well.[10]

The greater messenger declared by the Bab was a man named Mírzá Husayn ‘Alí, better known as Baha-ullah (1817–1892) and recognized as the founder of the Bahá’í Faith. Like the Bab, he had a reputation for being highly ethical and competent as well as humble. His efforts on behalf of the Babi movement, needless to say, were not met with appreciation by the authorities. For some years his family’s social position shielded him from the persecution being meted out to the Babis, but eventually he was also imprisoned and tortured.[11] He survived without being martyred due to his family’s social position and to the personal intervention by the Russian ambassador, Prince Dolgorukov (who was, coincidentally, a distant cousin of Helena Blavatsky --- her maternal grandmother was a Dolgorukov).

The authorities did not want to release Baha-ullah because of his ties to the Babis. However, his social status prevented them from executing him without a trial, and, given the testimony of Babis who had been prosecuted, a trial would have forced the authorities to release him because he was innocent of illegal acts. Hence, a prime minister who was a relative of Baha-ullah’s was finally able to convince the royal family to simply banish him. This was done, but not before every bit of his property was seized and his country home leveled. This did not weigh on him, because while imprisoned he had experienced the vision that convinced him he was indeed the messenger the Bab had proclaimed.[12]

The Babi movement was revolutionary in many ways but was, according to Godefroy, still recognizable as Shi’ite Islam.[13] Under Baha-ullah, the movement evolved into the Bahá’í Faith, an entirely separate religion whose fundamental teaching is Unity.

In 1852, accompanied by several members of his family, Baha-ullah was exiled to Baghdad, where he would remain for the first 10 years of a 40-year exile. By 1868, he and 70 or so family and followers arrived at the penal colony of Acre in Israel, sentenced to perpetual confinement. While the order of confinement was never lifted, his character and reputation eventually allowed him to move outside the walls of the prison. During his exile he wrote extensively, completing teachings that are estimated to fill 100 volumes.[14]

Baha-ullah’s eldest son and successor, Abbas Effendi (1844–1921), is known as Abdul Baha (“servant of Baha”). The writings of these two men, which are considered by the Baha’i community to have been revealed, comprise thousands of treatises on the nature of God, humanity’s purpose, and religious laws whose purpose is to bring humankind together.[15]

Upon Abdul Baha’s death in 1921, his grandson Shoghi Effendi was given the title of Guardian of the Baha’i Faith. He would be last in the line of hereditary leaders. A few years after his death in 1957, the Baha’i community elected the Universal House of Justice to guide the affairs of the Faith. This nine-member board is elected every 5 years by administrative bodies around the world.[16]

Among the thousands of documents comprising the Baha’i writings, the Kitáb-i-Aqdas or Book of Laws is described as “the Most Holy Book.”[17] This text includes nearly 200 behavioral commandments as well as: prayers; more than 100 questions and answers; an outline and summary of the Kitáb-i-Aqdas; and more than 190 “Notes” on numerous topics. The Hidden Word is (arguably) another of the most important Baha’i writings.[18] A number of the spiritual principles described in this collection of 82 short verses are familiar to many, whatever their religion. One translation of verse 27, for example, begins “Breathe not the sins of others so long as thou art thyself a sinner.” Verse 59 in its entirety states, “Thy heart is My home; sanctify it for My descent. Thy spirit is My place of revelation; cleanse it for My manifestation.”[19]

The Covenant of Baha’u’llah is also, of course, essential to the Faith. The Covenant does not appear to be a single document; rather, it encompasses countless Baha’i writings. The Universal House of Justice noted that “A Covenant in the religious sense is a binding agreement between God and man …”[20] The “Greater Covenant” is the promise that God always has provided -- and will continue to provide -- divine guidance for humankind, in the form of the various messengers and prophets who have appeared throughout human history.[21] (The Baha’i Faith recognizes all religions and all prophets as valid for their time, and considers Baha-ullah as God’s messenger for our times.) The “Lesser Covenant” is specific to members of the Baha’i Faith: it is “an agreement to accept the chain of succession which has taken place since the time of Baha’u’llah, beginning with Him” and continuing to the Universal House of Justice.[22]

"O ye children of men! The fundamental purpose animating the Faith of God and His Religion is to safeguard the interests and promote the unity of the human race, and to foster the spirit of love and fellowship amongst men…Whatsoever is raised on this foundation, the changes and chances of the world can never impair its strength, nor will the revolution of countless centuries undermine its structure." --Bahá’u’lláh[23]

"Bahá’í beliefs address such essential themes as the oneness of God and religion, the oneness of humanity and freedom from prejudice, the inherent nobility of the human being, the progressive revelation of religious truth, the development of spiritual qualities, the integration of worship and service, the fundamental equality of the sexes, the harmony between religion and science, the centrality of justice to all human endeavours, the importance of education, and the dynamics of the relationships that are to bind together individuals, communities, and institutions as humanity advances towards its collective maturity."[24]

Obviously, the essential teaching of the Baha’i Faith is unity – the oneness of God, the oneness of humankind, and the basic unity of all religions. While God is beyond human understanding, being both “too great and too subtle” for our finite minds, the “oneness of God” refers to the belief that the universe and everything in it was created by this “superhuman and supernatural Being.” Whatever a religion calls this Supreme Being, and whatever the differences may be in our understanding of Him, “we are speaking about the same unique Being.”[25]

Similarly, humanity as a whole is seen as an “organic unit”[26] that is evolving spiritually. As a species, we are finally beginning to acknowledge that physical characteristics such as skin color are shallow differences that have nothing to do with our inner selves. It is up to each one of us to try and see the divine in everyone and to treat all of our fellow humans with compassion and grace.

The Bahá’í Faith sees the various religions as stepping stones, as it were, toward the goal of unity. All the major religions are respected as appropriate to their time and place, and all their founders/prophets are seen as Manifestations of God. The Bahá’í Faith is seen as the current expression of the one religion, which is by no means complete — the “progressive revelation” is still unfolding.[27] 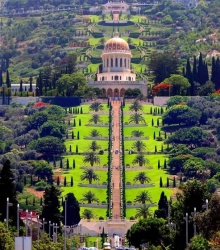 Miranda de Souza Canavarro, a Portuguese Theosophist in Hawai'i, is known to have explored Bahá'í Faith, although she was a confirmed Buddhist. She traveled to the Middle East to meet with 'Abdu'l-Baha.[28]

In the Hall of Unity in the headquarters of the Theosophical Society in Adyar, Chennai, India, Bahá’í Faith is included among the other great living religions – Christianity, Buddhism, Hinduism, Zoroastrianism, Islam, Jainism, Judaism, Taoism, Confucianism, and Shintoism – with representations of bas-relief symbols and figures.[29] Members of the Bahá’í community regularly join in interfaith activities at the headquarters of the Theosophical Society in America, and TS lodges have often presented programs by and about Bahá’ís.

In 1912, ‘Abdu’l-Bahá, the son of the founder of the Bahá’í Faith, traveled extensively across the United States.

In 1937, when Sidney A. Cook was president of the Theosophical Society in America,The American Theosophist published this account of an anniversary celebration:

When Abdu'l-Baha Abbas visited America twenty five years ago, The Theosophical Society opened its platform to him. Therefor, in response to an invitation by the Baha'i Movement in Chicago, Prof. R. Brenes-Mesen, at the request of the National President, attended their twenty-fifth anniversary celebration and delivered the following greeting:

"Out of the Morning of Eternity, where infinite wisdom and all-embracing love abide, at intervals, when duty weakens and nations decline, splendorous souls come to this earth again to grace mankind with a new spring of faith, with a new ray of hope. They come forth to enkindle the dormant fires in the souls of men, to point out once more the guiding star rising on the horizon of a new humanity. Such are the Masters of Wisdom and Compassion, manifestations of the Omnipotent Love the Holy Spirit.

"To this saintly lineage belong Bahau'llah, the Splendor of God, and Abdu'l-Baha, the Servant of God. They have brought before the eyes of men, amidst a divided world, the principles of the unity of mankind; and in the midst of so many sects, the salutary doctrine of the common foundation of all forms of religion in the manifestation of the Holy Spirit; and amidst the contentious social and economic conflicts of our epoch they remind us of our obligation to do some fruitful labor in the spirit of service, of the need of voluntary sharing of our wealth with others to foster universal peace and that we may realize the brotherhood of men.

"Knowing and with stint admiring those principles, when Abdu'l-Baha set foot in the United States The Theosophical Society bestowed on him the gracious hospitality of its platform. he was a teacher and a brother, he had our heartfelt welcome.

"The achievements of Baha'ism in this country, so magnificently embodied in this Baha'i House of Worship, are proclaiming the satisfaction that so many souls find in the beauty, the truth, and the transcendence of the teachings flowing from this wellspring of wisdom.

"In behalf of The Theosophical Society in America, and at the request of its national President, I tender to you, with our congratulations, our cordial wishes for your spiritual prosperity, for we are one in our endeavors of spiritualizing the world."[30]

The speaker, Professor Roberto Brenes-Mesen, was Secretary of Public Instruction for Costa Rica, a member of the International Council of the World's Court League, and a well-known lecturer on modern languages.