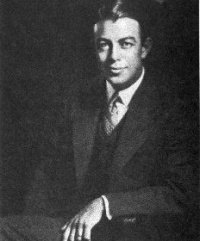 Benjamin Lee Whorf (April 24, 1897 – July 26, 1941) was an American fire prevention engineer who worked in the insurance industry. As an avocation, he studied linguistics. Whorf is widely known as an advocate for the idea that because of linguistic differences in grammar and usage, speakers of different languages conceptualize and experience the world differently. This principle has frequently been called the "Sapir–Whorf hypothesis", after him and his mentor Edward Sapir, but Whorf called it the principle of linguistic relativity, because he saw the idea as having implications similar to Einstein's principle of physical relativity.

He became a member of the Theosophical Society in America on February 2, 1940, joining the Hartford, Connecticut Lodge. Mrs. Whorf was also active in the Hartford Lodge and in the Northeast Federation. After her husband died on July 26, 1941, she hosted a reception for the federation at her home with a vegetarian supper, musical entertainment, and a talk by Fritz Kunz.[1]