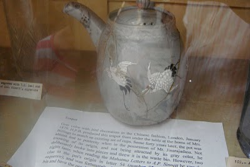 The Chinese teapot, along with a card-case were phenomenally produced by H. P. Blavatsky.

The incident is mentioned in Mahatma Letter Number 92, which says:

While in London, at the Billings, Jan. 1879, H.P.B. who had produced a china pot from under the table, was asked by C.C.M. to give him some phenomenally produced object too. Consenting she caused a small card-case, as carved in Bombay to appear in the pocket of his overcoat hung in the hall.[1]