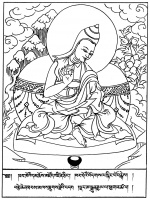 Dangma (possibly from dwangs-ma or dwans-ma),[1] is a rare Tibetan word which, according to H. P. Blavatsky, means "a purified Soul. A Seer and an Initiate; one who has attained full wisdom".[2]

A reference to the word "dangma" (with alternative spelling ldang ma) in Tibetan Buddhism can be found in the legendary Dangma Lhungyel (ldang ma lhun rgyal), a Tibetan monk of the 11th century who is credited with having discovered the seventeen Dzogchen tantras hidden in the Zhai Temple.[3]

The Stanza I.8 of volume 1 of The Secret Doctrine refers to the Dagma as he who is able to perceive the "one form of existence":

Alone the one form of existence stretched boundless, infinite, causeless, in dreamless sleep; and life pulsated unconscious in universal space, throughout that all-presence which is sensed by the opened eye of the Dangma.[4]

Dangma means a purified soul, one who has become a Jivanmukta, the highest adept, or rather a Mahatma so-called. His “opened eye” is the inner spiritual eye of the seer, and the faculty which manifests through it is not clairvoyance as ordinarily understood, i.e., the power of seeing at a distance, but rather the faculty of spiritual intuition, through which direct and certain knowledge is obtainable. This faculty is intimately connected with the “third eye”, which mythological tradition ascribes to certain races of men.[5]

The "open eye" (known in India as the "eye of Siva")[6] can be used by the Initiate to "sense" the ultimate realities:

The Initiate, rich with the lore acquired by numberless generations of his predecessors, directs the “Eye of Dangma” toward the essence of things in which no Maya can have any influence.[7]

Origin of the term

Dangma is not a very common word in known Tibetan writings. The standard Tibetan-English Dictionary by Sarat Chandra Das gives only an obscure unrelated meaning of "juice," etc. (page 617); but the earlier 1881 Tibetan-English Dictionary by H.A. Jäschke says this (page 249): "'the spirit; the soul', a signification not found hitherto in any book, but according to a Lama's statement the word denotes a soul, when purified from every sin, and to be compared to a clear and limpid fluid, in which every heterogeneous matter has been precipitated." . . . The definitive new Tibetan-Tibetan Dictionary, the Tshig mdzod chen mo, gives two basic meanings: gtso-bo and gsal-ba. The first, gtso-bo, is defined by Das in English as: self, soul; chief, lord, master. The second, gsal-ba, means: pure; clear. Though I do not think these sources shed any new light on the term Dangma, they do at least confirm the meaning given in The Secret Doctrine, "purified soul," of a rather rare word.[8]