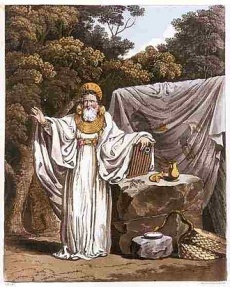 Druidism was the class of high-ranking professionals in ancient Celtic cultures. Perhaps best remembered as religious leaders, the druids were also legal authorities, adjudicators, lorekeepers, medical professionals, and political advisors. While the druids are reported to have been literate, they are believed to have been prevented by doctrine from recording their knowledge in written form, thus they left no written accounts of themselves. They are however attested in some detail by their contemporaries from other cultures, such as the Romans and the Greeks.

The mystery veiling the origin and the religion of the Druids is as great as that of their supposed fanes [temples] is to the modern Symbologist, but not to the initiated Occultists. Their priests were the descendants of the last Atlanteans, and what is known of them is sufficient to allow the inference that they were eastern priests akin to the Chaldeans and Indians, though little more. It may be inferred that they symbolized their deity as the Hindus do their Vishnu, as the Egyptians did their Mystery God, and as the builders of the Ohio great serpent mound worshipped theirs — namely under the form of the “Mighty Serpent,” the emblem of the eternal deity TIME (the Hindu Kala). Pliny called them the “Magi of the Gauls and Britons.” But they were more than that. The author of Indian Antiquities [Thomas Maurice] finds much affinity between the Druids and Brahmins of India. Dr. Borlase points to a close analogy between them and the Magi of Persia; others will see an identity between them and the Orphic priesthood of Thrace — simply because they were connected, in their esoteric teachings, with the universal Wisdom Religion, and thus presented affinities with the exoteric worship of all.

Like the Hindus, the Greeks and Romans (we speak of the Initiates), the Chaldees and the Egyptians, the Druids believed in the doctrine of a succession of worlds, as also in that of seven “creations” (of new continents) and transformations of the face of the earth, and in a sevenfold night and day for each earth or globe.” In the same work (2:760), Blavatsky wrote, “The Druids believed in the rebirth of man . . . in a series of reincarnations in this same world; for as Diodorus says, they declared that the souls of men, after determinate periods, would pass into other bodies.

Other Theosophical writers on Druidism 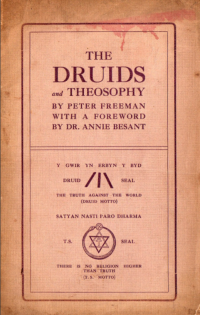 A number of Theosophical writers have written on Druidism as an aspect of the Ancient Wisdom. In the introduction to Peter Freeman's 1924 pamphlet, The Druids and Theosophy, Annie Besant states:

That the Druids held in trust secrets of science and mystic lore we know. Persecution by the ignorant and the superstitious slew, and drove into hiding the wise and the understanding, and robbed the lands of the Kelts of music and poesy, of art and grace, save that which was interwoven in the soul of the people and made them what they were.

Freeman further propounds a relationship between Druidism and Theosophy on the last page of the text:

From the above it does not seem unreasonable to assume that the Druids were to the Fourth Sub-Race, what the Theosophical Movement is to the Fifth, and that the same great fundamental teachings of life which inspired the Druids are now the ideals by which many try to live as Theosophists.