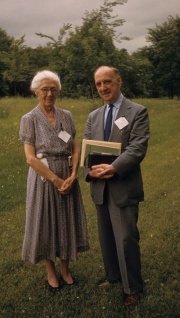 Lt. Colonel E. L. Thomson, DSO, was the General Secretary of the Canadian Section of the Theosophical Society (Adyar) during the 1950s.

Lt. Col. Thomson served in the Boer War and in France during the First World War, from 1914-1918. Most of the time he was in the front lines. From 1923 to 1945 he worked at the Hydro Electric Power Commission of Ontario, and established a veterans' group there.[1]

Upon Thomson's death, The Canadian Theosophist published these remarks:

Lt. Col. E. L. Thomson, gives an interesting account in The Canadian Theosophist for November 1954, of his eight day visit by air to the Lodges in the western area, the first since he came to office ten years ago. He left Toronto on September 23rd, making his first atop at Winnipeg, where the Wayfarers Lodge of the Canadian Federation met him and arranged a special meeting in his honor. He visited Calgary and Edmonton, where he spoke at meetings attended by members of both the Section and Federation. In Vancouver, where he gave talks to members and a public lecture, he was able to make his first personal contact with some members of the Section Executive.[3]

In his later years, Colonel Thomson lived located on the Scarborough Bluffs on the north shore of Lake Ontario, in a residential community of artists. James S. Perkins, himself a commercial artist, visited Scarborough and wrote: "Here a cooperative guild of associated artists and craftsmen, and those who are interested in these cultural developments, are bringing into reality a garden village created upon the ideal of living in closer harmony with nature."[4] Thomson painted in oils and also engaged in weaving. "His artistic ability was considerable and many young artists were indebted to him for the help and encouragement he gave them both personally and through the artists' Society which he founded."[5] 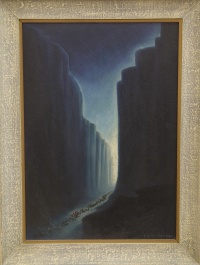 He donated a painting to the Theosophical Society in America, where he frequently attended summer conventions. Toward the Light depicts humanity struggling toward spirituality. The towering cliffs denote the world hemming them in.