Edward Wimbridge was an Englishman who became an early member of the Theosophical Society.

Little is known of the life of Edward Wimbridge. He used the letters "G.R.I.B.A." after his name[1], and this indicates "Graduate of the Royal Institute of British Architects." 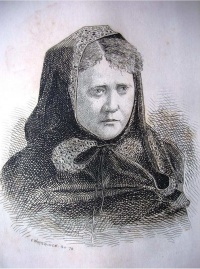 Wimbridge was admitted to the Theosophical Society in 1876 or early 1877, making him one of the first people to join the Society. His residence in 1877 was listed as 1 Union Square, New York City. [2] He accompanied the Founders to India in 1879, along with Rosa Bates. For a brief time, he was a member of the General Council of the Theosophical Society.[3]

He put his artistic skills into service for the Society. Henry Steel Olcott wrote in his diary entry on July 31, 1879 that Mr. Wimbridge designed the cover and engraved the heading for The Theosophist. In her diary, Madame Blavatsky noted that on September 11, 1878, Wimbridge prepared a portrait of her for engraving. It was etched on copper and appeared in the 1878 fourth edition of Isis Unveiled published by J. W. Bouton in New York.[4][5]

Additional details about Wimbridge were published in a circular letter of September 7, 1880, addressed to "Theosophists and Arya Samajists" by Henry S. Olcott and H. P. Blavatsky, which was printed in the Indian periodical The Vivekavarthani at the urging of Damodar K. Mavalankar. In it the Founders stated that Bates and Wimbridge had become members a few weeks before sailing for India. The two did not assist in establishing the Society in India, and did not sympathize with the Founders' activities. Wimbridge was occupied in establishing a private business at Bombay. Rosa Bates got into a rather public quarrel with another woman and was eventually expelled from the Society. Wimbridge resigned in her support.[6] NOTE: The timing in this account is slightly contradicted by the Membership Register of the Society, which shows that Wimbridge was admitted as a member in 1877.

Wimbridge appears as "Mr. W." in Blavatsky's travel account, From the Caves and Jungles of Hindostan.[7][8]