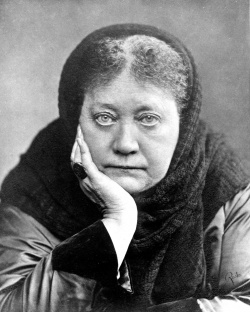 Enrico Resta was a London photographer who took the most well-known photograph of Helena Petrovna Blavatsky, the "Sphinx" pose.

Enrico Resta was born in Italy in 1858 or 1859. He and his wife Adelina had three children - Linda and Dario, who were born in Italy, and Olga, born around 1889 in England. Mr. Resta became a British citizen.[1] His son Dario (1883-1924) became a champion athlete in bicycle racing and figure skating, and died in an automobile racing accident.

The photographer died in 1942.

Resta was well-regarded as a portrait photographer in his time. His studio was in his home at 4 Coburg Place, Bayswater Rd., London.[2][3] His business seems to have been busy and prosperous. An 1889 reviewer wrote:

Mr. Enrico Resta has succeeded in producing some capital portraits of children, original in pose and very droll in expression... there is so much vitality and "go" about Mr. Resta's youngsters that they compel attention. Mr. Resta, I take it is a little of a humourist, and therefore, as a contrast to his laughing natural children, he gives us a life-sized head of the mystic Madame Blavatsky. This head, with its singular eyes, is either a magnificent portrait, or a caricature, just as you happen to be, or not to be, a theosophist.[4]

Resta's works are held in some of the most prominent portrait collections such as England's National Portrait Gallery, the National Archives in Kew, and the New York Public Library's Photography Collection.

Mr. Resta took photographs of Madame Blavatsky, Annie Besant, and Theosophical Society congresses in London. He described his experience with HPB in a 1942 letter to John B. S. Coats:

One morning (January 8, 1889) I was in my studio at 4, Cobalt Place, Bayswater, very busy taking photographs when an assistant whispered to me that a lady wanted to be photographed at once if possible, having very little time to spare. So after explain this matter to the parents of the child who had the next appointment, to enable me to accommodate my unknown client, in came Mme. Blavatsky with the Countess Wachtmeister. The first lady immediately sat down by a small table and I noticed that she put her right hand into her pocket and rolled a cigarette, which you will see in the photos. I told my assistant to get out some negatives. Without any 'studio arrangement' Mme. Blavatsky expressed the wish to face the camera in that natural position, and being tremendously impressed with the personality and the expression, I took six plates, which to my delight were successful. Mme. Blavatsky arose, thanked me for favouring her so quickly, saying some artist had recommended my work. The proofs were dispatched to be returned with a letter expressing pleasure at the results, and, as you know, many thousands have been printed for the Theosophical Society. Of course many other photographs were taken, including those of Mrs. Besant and Congress Groups, and occasionally I received a simple invitation to pay an informal visit to this great lady, where the conversation ranged over life in all its aspects, perhaps the limitless power of good, or a kindly interest in my own work which I loved. Some years later I gave up the studio, and the only negatives I chose to keep were these six. They have been deeply treasured by me, and are in perfect condition, but now that I am an old man of 85 I feel that these realistic emblems of a great personage should no longer be retained by me, and am honoured in being able to pass on my negatives to the Theosophical Society, their true anchorage.[5]

As of 1962, the Theosophical Society in England had the original Resta negatives, and a duplicate set was being held by a photographic studio, Elliott & Fry, Ltd., 22a Baker Street, Portman Square, London.[6]