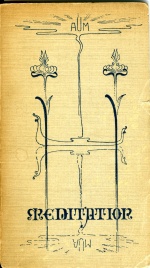 Pamphlet by H. B. Mitchell

Mr. Mitchell wrote 25 articles that were printed in The Theosophical Quarterly under the name Henry Bedinger Mitchell, 8 more under HB Mitchell, and 9 more under HBM. He also published some pamphlets:

He wrote a lively book, Talks On Religion: a Collective Inquiry, that is a transcription of a series of dialogues among fifteen distinguished men who are identified by profession, but not by name: The Mathematician, The Historian, The Philosopher, The Zoologist, The Author, The Clergymen, The Editor, The Biologist, The Social Philosopher, The Banker, The Pragmatist, The Anthropologist, The Oxonian, The Logician, and The Youth. Many are also addressed by a letter, so it is possible to identify some of the participants. The Mathematician, in whose home the talks took place, was Mitchell himself; The Author was almost certainly Charles Johnston; and The Banker was probably Clement Acton Griscom, Jr.. It was published in New York at Longman, Green, and Co., in 1908. It is available online at Internet Archive, at Google Books, at Hathitrust, and at Readanybook.com.