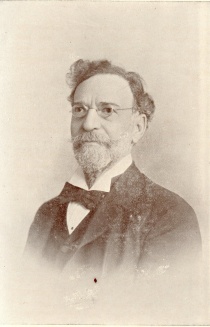 José Maria Massō was a member of the Theosophical Society based in Adyar, Chennai, India and founded the Cuban Section.

Annie Besant wrote about him in her series on "Theosophical Worthies":

Our good Brother, José M. Massō, is one of those who has passed away from earth after doing good work for the Masters and Their Society; he added a new Section to its organisation, and set up the Theosophical Flag in Cuba.

Don José M. Massō was born in 1845 at Villanueva y Geltrū, Catalonia, Spain. He went to Cuba when only fifteen years of age, in 1860, and was employed there by one of his uncles, who was a merchant in Havana. Later on, he became a broker, and in 1871 he entered the married life, wedding a young Cuban lady.

From 1871, he wrote frequently on political and social questions, and spread—at considerable peril to himself—the republican and democratic ideals which he had embraced. The Spanish rulers of the Island regarded these views as almost criminal, but Don José Massō was a man who “had a conscience in what he did,” and that which he believed to be true and useful he proclaimed.

In 1872, he became a Free Mason — a step very offensive to the Roman Catholic Church — and, restlessly seeking truth, he studied Spiritualism for nine years, from 1875 to 1884. Not here, however, could he find the rest he craved, but when, in 1884, his first Theosophical book fell into his hands, he read — and knew. The book came as a revelation, and brought light to his intellect, peace to his heart. Thenceforth he saw his goal and the path which led to it; he saw the radiant face of Truth, and laid his life down at her feet.

In 1889, he made up his mind to establish a Branch of the Theosophical Society in his adopted country, and gathered a few friends around him; the Lodge was definitely constituted in 1901, as the Annie Besant Branch, and began its corporate life with ten members — the first Theosophical Lodge in Cuba.

From that time forward, progress was rapid; Don José worked steadily to spread Theosophical ideas, founded and supported a Theosophical monthly, which he printed at a little press started by himself for the work. He travelled about lecturing, in addition to his other work, and, so successful was he, that he organised the Cuban Section with six Lodges in Cuba and one in San José, Costa Rica, and it was chartered in July, 1905. He became the general Secretary of the Section, and by 1908 its Branches numbered no less than twenty-six — a remarkable testimony to his ability, energy and devotion.

Don José Massō passed away on July 26, 1908, after some years of failing sight and weakening health. He was much attached to the President-Founder, an affection which was cordially reciprocated, and felt very keenly the action of those who disbelieved the Colonel's dying testimony to his Master, and rejected his last wishes as to his successor. He was one of my staunchest supporters in the troublous times which followed the President-Founder's death, and was a strong and loyal friend throughout.

Peace to his memory. Well did he do his Master's work, and, having been faithful to the end, he has earned the rest into which he has gone.[1]

Notice has just been received of the termination of the physical incarnation of Senor Jose Maria Masso, General Secretary of the Cuban Section, who passed away on the 25th of July. Thus we have lost on the physical plane one of the sincerest, most devoted and self-sacrificing members of the Theosophical Society. Mr. Masso embraced Theosophy at a time when conditions of life seemed very hard, and his gratitude to our philosophy was so great that he threw his whole life to its propaganda. At the time he undertook the work, he could not secure a publisher for articles pertaining to Theosophy, and so at considerable sacrifice, he purchased a printing press and established it in his own home, and by setting up the type and turning out the matter at night, he, with the assistance of a few devoted co-workers, was enabled to spread Theosophy throughout Cuba. During the latter part of his life, he had serious physical difficulties to battle with, and his friends, though missing the upliftment of his personal presence, will nevertheless feel a sense of happiness that his suffering body is at rest.

During the month that Colonel Olcott and I spent with Mr. Masso in Cuba, a few years ago, we both learned to love him, not only for his extraordinary devotion to our cause, but for his noble and chivalrous nature, and he himself was very greatly devoted to the Colonel. Just before he died, he called out: ‘Colonel, Colonel, Colonel,’ and then passed away. Few of our members have ever worked under the same degree of difficulties and at the same time given the some amount of unselfish devotion. May light shine upon him![2]