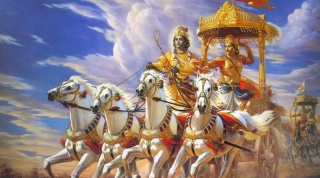 Krishna and Arjuna in chariot

The Mahābhārata (Sanskrit: महाभारतम्) is one of two major Sanskrit epics and foundation texts of ancient India. Modern scholars agree that it was composed in the fifth or fourth century BCE. It was originally rather short but over time grew through oral tradition to the modern version, now 1.8 million words, in length nearly seven times longer than Homer’s combined epics, the Iliad and Odyssey.

It is an epic depicting the battle between one’s mixed higher spirituality against one’s baser inclinations.

The epic tells of two branches of one family, cousins who vied against each other for power, the Pandavas and their cousins the Kauravas, sons of two brothers, Dhritarashtra and Pandu. War for control of the kingdom eventually became unavoidable. Sri Krishna, by that time the eighth incarnation of Vishnu, one of the Hindu Trinity, became the war charioteer of the Pandava brother Arjuna.

It was Arjuna’s reluctance to engage in bloody battle against the other branch of his own family that gave rise to the dialog between himself and his divine charioteer Sri Krishna, the book known as the Bhagavadgita, concerning human nature, ignorance of body and soul, worldly illusion, noble duty, karma, and spiritual growth towards moksha - ultimate release from Samsara, the cycle of death and rebirth.

Numerous translations and editions are available on the Internet, including:

Numerous documentaries, films, and television series have been based on The Mahabharata. Here are examples in English or with English subtitles:

In addition, there are many fan-fiction or amateur videos:

Several recordings of the entire epic are available in English and other languages: