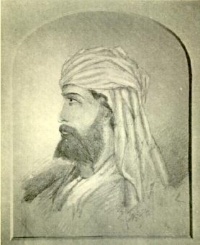 Monsieur A. Harrisse was a French amateur artist who drew the first portrait of Master Morya in black and white crayons at The "Lamasery" in New York, on February 11, 1878.

Helena Petrovna Blavatsky was introduced to him by a mutual friend in New York who has not been identified. She wrote: "You could not have been presented by a more welcome friend than our lighthearted sneering little French “BulBul,” my beloved “petite vielle” [Fr. little old woman] A. Harrissee[.] His introduction was not required though, to make me know a name which the zephyrs of social fame had long since wafted to the four quarters of the world."[1]