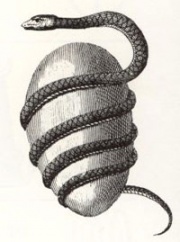 Orphism (Ancient Greek: Ὀρφικά) is a religion originating in the ancient Greece and associated with literature. It is ascribed to the mythical poet Orpheus, (sometimes referred as the "dark-skinned") who is regarded as the inventor of letters and writings. He is said to have descended into Hades and returned, and is regarded as the founder of the Mysteries of Dionysus, which were designed to learn and become familiar with the afterlife.

Some of the Orphic teachings resemble more those of India than of Greece. They taught that human souls were divine and immortal, but was caught in a "grievous circle" of metempsychosis (reincarnation). They prescribed an ascetic way of life that included vegetarianism. Participation in the secret initiation rites, was supposed to guarantee not only eventual release from the circle of reincarnations but also communion with the gods.

H. P. Blavatsky wrote that "Herodotus tells us that the mysteries were brought by Orpheus from India".[1] Referring to Orpheus, she stated the following:

Orpheus (Gr.). Lit., the “tawny one”. Mythology makes him the son of Æger and the muse Calliope. Esoteric tradition identifies him with Arjuna, the son of Indra and the disciple of Krishna. He went round the world teaching the nations wisdom and sciences, and establishing mysteries. The very story of his losing his Eurydice and finding her in the underworld or Hades, is another point of resemblance with the story of Arjuna, who goes to Pâtâla (Hades or hell, but in reality the Antipodes or America) and finds there and marries Ulupi, the daughter of the Nâga king. This is as suggestive as the fact that he was considered dark in complexion even by the Greeks, who were never very fair-skinned themselves.[2]

And regarding the Orphic Mysteries, she explained:

Orphic Mysteries or Orphica (Gr.). These followed, but differed greatly from, the mysteries of Bacchus. The system of Orpheus is one of the purest morality and of severe asceticism. The theology taught by him is again purely Indian. With him the divine Essence is inseparable from whatever is in the infinite universe, all forms being concealed from all eternity in It. At determined periods these forms are manifested from the divine: Essence or manifest themselves. Thus through this law of emanation (or evolution) all things participate in this Essence, and are parts and members instinct with divine nature, which is omnipresent. All things having, proceeded from, must necessarily return into it; and therefore, innumerable transmigrations or reincarnations and purifications are needed before this final consummation can take place. This is pure Vedanta philosophy. Again, the Orphic Brotherhood ate no animal food and wore white linen garments, and had many ceremonies like those of the Brahmans.[3]

In The Hymns of Orpheus, Thomas Taylor notes that:

According to the theology of Orpheus therefore, all things originate from an immense principle, to which through the imbecility and poverty of human conception we give a name, though it is perfectly ineffable, and in the reverential language of the Egyptians, is a thrice unknown darkness, in the contemplation of which all knowledge is refunded into ignorance.