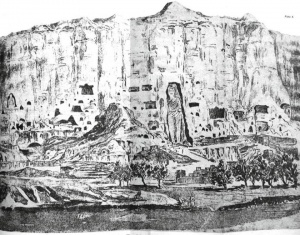 Maitland 1886 drawing of the Buddhas at Bamiyan

Captain P. J. Maitland was present at the dinner party at the home of A. O. Hume where the first of the brooch phenomena took place. Nothing more is known of his connections to Helena Petrovna Blavatsky and the early members of the Theosophical Society.

The only Captain P. J. Maitland in the Indian subcontinent at that time was in the staff corps of the 3rd Regiment, Sind Horse headquartered at Jacobabad [a northern province of Pakistan].[1] He wrote reports for the Afghan Boundary Commission between October 1884 and October 1886 about the social structures of the Hazaras and Turkmens.[2] Working with Captain M. G.Talbot, he conducted a topographic survey in the district of Bamiyan. Talbot "wrote a detailed report regarding the caves two colossi, and Maitland was the author of a series of drawings of the caves and statues."[3] Maitland later rose to the rank of Lt. Colonel.