From Theosophy Wiki
(Redirected from Parabrahm)
Jump to: navigation, search

Parabrahman (devanāgarī: परब्रह्मन्) from para "highest" or "supreme" and Brahman "universal self or spirit", is a term often used in Hindu philosophy, especially in Advaita Vedanta, for the highest deity, or, rather, the Absolute Reality that is beyond gods.

In the writings of H. P. Blavatsky Parabrahman is frequently used as a synonym for the Absolute or the Be-ness:

Parabrahm (the One Reality, the Absolute) is the field of Absolute Consciousness, i.e., that Essence which is out of all relation to conditioned existence, and of which conscious existence is a conditioned symbol. But once that we pass in thought from this (to us) Absolute Negation, duality supervenes in the contrast of Spirit (or consciousness) and Matter, Subject and Object. Spirit (or Consciousness) and Matter are, however, to be regarded, not as independent realities, but as the two facets or aspects of the Absolute (Parabrahman), which constitute the basis of conditioned Being whether subjective or objective.[1]

At the commencement of a great Manvantara, Parabrahm manifests as Mulaprakriti and then as the Logos. This Logos … constitutes the Basis of the subject-side of manifested Being, and is the source of all manifestations of individual consciousness. Mulaprakriti or Primordial Cosmic Substance, is the foundation of the object-side of things — the basis of all objective evolution and Cosmogenesis. Force, then, does not emerge with Primordial Substance from Parabrahmic Latency. It is the transformation into energy of the supra-conscious thought of the Logos, infused, so to speak, into the objectivation of the latter out of potential latency in the One Reality.[2]

This “Be-ness” is symbolised in the Secret Doctrine under two aspects. On the one hand, absolute abstract Space, representing bare subjectivity, the one thing which no human mind can either exclude from any conception, or conceive of by itself. On the other, absolute abstract Motion representing Unconditioned Consciousness. Even our Western thinkers have shown that Consciousness is inconceivable to us apart from change, and motion best symbolizes change, its essential characteristic. This latter aspect of the one Reality, is also symbolized by the term “The Great Breath,” a symbol sufficiently graphic to need no further elucidation. Thus, then, the first fundamental axiom of the Secret Doctrine is this metaphysical One Absolute — Be-ness — symbolized by finite intelligence as the theological Trinity[3]

Shankara’s idea of the Parabrahman

By reflecting on Upanishadic assertions, Shankara made a distinction between Brahma as it must be in itself and as it has got to be conceived by us in relation with the world of our experience.

The former he calls nirguna Brahma, nirvishesha or Parabrahman, and the latter, saguna, savishesha or apara Brahma.

Parabrahman is eternally self-identical, strictly one, always of the same nature, without parts, and hence without change, perfectly immutable in its essential nature, indestructible because of knowing no increase or decrease, imperceptible, inconceivable, ungraspable, devoid of all qualities, without parts, untouched by action, perfectly quiet, pure and stainless, neither coarse nor fine, neither big nor small. Neither space nor time can be conceived in it; for it is neither this nor that. It is great, unborn, undecaying or unaging, indestructible, immortal and free from all fear.

It is different from vice and virtue both, and different from both cause and effect. The triple-time designated as past, present and future does not enter into its nature. It is not in time nor time in it. So also neither space is in it, nor it, in space. It has neither inside or outside, no cause, no effect. In fact, none of the categories in terms of which we understand things is applicable to it. It is indefinable because it is indeterminate. A definition must be per genus et differentiam.[4] But (Para) Brahma has neither genus nor differentia.

It is the highest Being, and there is nothing existing independently of it, from which it could be distinguished. Though beyond all time and space, etc., it permeates all. Just as the great space (Ākāśa) pervades the space within a jar, so also (Para) Brahma, called Sat, pervades the entire universe, including the space itself. All the same, it is, in its essential nature, altogether unconditioned, and devoid of all qualities which characterize the world we live in. Parts or properties it has none. It is non-related (asanga and asansargi), and devoid of all adjuncts and differences.

This however does not mean that it is not nothing. To negate qualities of (Para) Brahma is not to negate its Being or existence. In fact, all existence that appears to be there is said to be the existence of (Para) Brahma itself. It is eternally self-existent, and hence the only real entity. It is the ultimate source, ground and support of all appearances. It is the existence that shines forth in all beings alike. It is the universal Self of all of us. And our undeniable experience of our existence, Shankara has maintained, is the surest proof of its existence.[5] 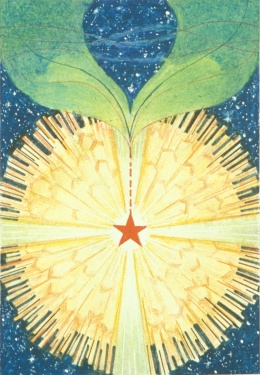 James S. Perkins painted a visualization of Parabrahman, and wrote:

The Unknowable One, termed in Sanskrit Parabrahman, is seen here [illustration at right] as cold flame wrapped in profoundest mystery, pointed downward into the ocean of matter, the mother of universes. Then "Father-Mother spin a web" that embraces the new universal boundary. The solitary ray is Divine energy that brings to birth a star in its appointed center. The star is the embodiment of the Solar Logos. His light expands through the luminous sphere. It is the first veil of spirit-matter over the primordial Space-Consciousness of Parabrahman. The first veil is the solar Adi, the primeval plane of Nature that measures the circumference of the new universe. Other universes exist in untold numbers and sizes.[6]