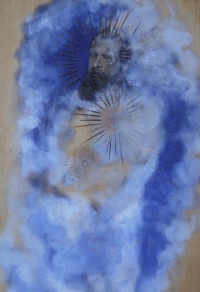 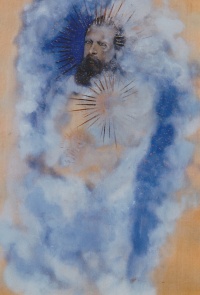 Another photo of M. A. Oxon portrait, from Joy Mills Papers, Krotona Institute.

The Portrait of Stainton Moses is a piece of art work produced phenomenally by H. P. Blavatsky in New York, in the autumn of 1876, and in the presence of H. S. Olcott. It depicts the "Double" of Stainton Moses (M. A. Oxon) when the latter was trying to develop the ability to project it at will. This painting is in the Archives of the Theosophical Society in Adyar, Chennai, India, and as recently as January 2015 the colors are absolutely vibrant and fresh.

Col. Olcott explains that one evening, in the autumn of 1876, he and H. P. Blavatsky were discussing the principles involved in the conscious projection of the Double. Finding difficult to explain it, Mme. Blavatsky decided to show him in a picture how Oxon’s evolution in this direction was proceeding. The Colonel explains:

Rising from the table, she went and opened a drawer from which she took a small roll of white satin . . . and laying it on the table before me, proceeded to cut off a piece of the size she wanted; after which she returned the roll to its place and sat down. She laid the piece of satin, face down, before her, almost covered it with a sheet of clean blotting-paper, and rested her elbows on it while she rolled for herself and lighted a fresh cigarette. Presently she asked me to fetch her a glass of water.[1]

The Colonel refused to leave her alone until she had finished the precipitation, at which Mme. Blavatsky appeared to get upset. He continues his story:

Then, raising the paper and turning over the satin, she tossed it over to me. Imagine, if you can, my surprise! On the sheeny side I found a picture, in colours, of a most extraordinary character.[2]

The Colonel describes the portrait as follows:

There was an excellent portrait, of the head only, of Stainton Moses as he looked at that age, the almost duplicate of one of his photographs that hung “above the line” on the wall of the room, over the mantel-shelf. From the crown of the head shot out spikes of golden flame; at the place of the heart and the solar plexus were red and golden fires, as it might be bursting forth from little craters; the head and the place of the thorax were involved in rolling clouds of pure blue aura, bespeckled throughout with flecks of gold; and the lower half of space where the body should be was enwrapped in similarly rolling clouds of pinkish and greyish vapour, that is, of auras of a meaner quality than the superior cumuli.[3]

The painting also shows two flaming vortices over the cardiac and umbilical regions.

Col. Olcott interprets the meaning of the painting as follows:

At that stage of my occult education I had heard nothing about the six chakrams, or psychical evolutionary centres in the human body, which are mentioned in Yoga Sâstras [scriptures], and are familiar to every student of Patanjali. I therefore did not grasp the significance of the two flaming vortices over the cardiac and umbilical regions; but my later acquaintance with the subject gives this satin picture an enhanced value, as showing that the practical occultist who made it apparently knew that, in the process of disentangling the astral from the physical body, the will must be focussed in succession at the several nerve-centres, and the disengagement completed at each in turn before moving on to the next centre in the order of sequence. I take the picture to mean that Stainton Moses’ experiment was being conducted as an intellectual rather than as a spiritual process, wherefore he had completely formed and got ready for projection his head, while the other parts of his astral body were in a state of nebulous disturbance, but had not yet settled into the stage of rûpa, or form. The blue clouds would represent the pure but not most luminous quality of the human aura—described as shining, or radiant; a silver nimbus. The flecks of gold, however, that are seen floating in the blue, typify sparks of the spirit, the “silvery spark in the brain,” that Bulwer so beautifully describes in his Strange Story; while the greyish and pinkish vapours of the inferior portions show the auras of our animalistic, corporeal qualities.[4]