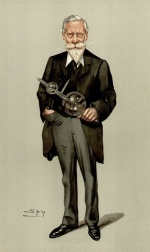 Radiant Matter is the term used to describe what British physicist William Crookes stated was a fourth state of matter, in a time when the atom was thought to be a small solid ball, indivisible and without motion. His theories were confirmed by the end of the 19th century and beginning of the 20th when it was discovered that what Crookes observed was a flow of electrons in a medium containing plasma, the fourth state of matter. It is now known that 99.9% of the matter in the universe is plasma.

Crookes's experimental work in this field was the foundation of discoveries which eventually changed the whole of chemistry and physics.

By the 1870s the nature of electricity was unknown, and many experiments were done to determine its nature. Tubes with a low vacuum, possessing two metal electrodes (one at either end) were commonly employed for this purpose. When a high voltage was applied between the electrodes, a glow filling the tubes was observed. This glow was said to be the effect of "cathode rays." 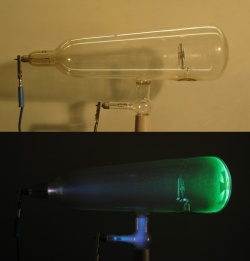 Two views of the Crookes tubes

William Crookes was able to generate a higher vacuum in tubes (known as "Crookes Tubes") and found out that as he pumped more air out of the tubes, they became totally dark, except for the anode end, where the glass of the tube itself began to glow. This showed that the cathode rays traveled in straight lines from the cathode (negative) end to the anode (positive), causing fluorescence in objects upon which they impacted, and producing great heat.

At the time there were two theories to explain the nature of the cathodic rays. Heinrich Hertz and others believed they were "aether waves," while Crookes insisted they were formed by particles. He maintained they were a fourth state of matter where atoms were electrically charged. The debate was resolved in 1897 when Sir J. J. Thomson established the particle-nature of the rays. However, he discovered they were not atoms, but a new particle (the first subatomic particle to be discovered) which was named "electron". Thus, Thomson proved that the cathode rays are streams of electrons.

The full description of what happens in a Crookes tube is complicated because it contains a non-equilibrium plasma where electrons are moving an interacting with positive ions and neutral atoms. The details were not fully understood until the development of plasma physics in the early 20th century.

The Crookes tubes were used in many historic experiments. For example, in 1895, Wilhelm Röntgen discovered the X-rays emanating from Crookes tubes. Eventually, these tubes were superseded by the electronic vacuum tubes, in whose development Thomas Edison played an important role.

H. P. Blavatsky maintained that Crookes' discovery of "radiant matter" proved that there exist more refined states of matter (or particles) than the "solid atoms" of her time. She argued that electricity was not an immaterial force, but a form of matter (later known as the electron) which does not have the properties assigned to "dense matter":

But what is in reality Matter? We have seen that it is hardly possible to call electricity a force, and yet we are forbidden to call it matter under the penalty of being called unscientific! . . . And, as Professor Crookes has now succeeded in refining gases to a condition so ethereal as to reach a state of matter “fairly describable as ultra-gaseous, and exhibiting an entirely novel set of properties,” why should the Occultists be taken to task for affirming that there are beyond that “ultra gaseous” state still other states of matter; states, so ultra refined, even in their grosser manifestations—such as electricity under all its known forms—as to have fairly deluded the scientific senses, and let the happy possessors thereof call electricity—a Force![1]

The Mahatmas and Radiant Matter

Crookes was a member of the Theosophical Society and for a time was one of the five counselors of the T.S. Mahatma M. says that it was his occult research which led to his discovery of radiant matter:

And Crookes — has he not brought science within our hail in his “radiant matter” discovery? What but occult research was it that led him first to that.[2]

Master K. H. maintained that the "fourth state of matter" was not the ultimate one, but that there were higher states to be discovered:

Western Science has still three additional states of matter to discover. . . . If Mr. Crookes would penetrate Arcana beyond the corridors the tools of modern science have already excavated, let him — Try. He tried and found the Radiometer; tried again, and found Radiant matter; may try again and find the “Kama-rupa” of matter — its fifth state. But to find its Manas he would have to pledge himself stronger to secrecy than he seems inclined to.[3]