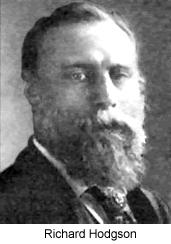 Richard Hodgson (September 24, 1855 - December 20, 1905) was an Australian attorney who investigated psychic phenomena. He became a member of the English Society for Psychical Research (S.P.R.) in 1882, and is best known as author of the "Hodgson Report", in which he declared that Madame Blavatsky used fraudulent means to produce phenomena.

Richard Hodgson was born in Melbourne, Australia on September 24, 1855 as the son of R. Hodgson, a leather merchant. He was awarded a Master of Arts degree, and then a doctor of law degree in 1878 from the University of Melbourne. In the 1880s he moved to England to study poetry at St John's College, Cambridge, where he met Henry Sidgwick, a professor of moral philosophy and an important influence in his life.

After he was offered a position as secretary, in the American Society for Psychical Research, Hodgson moved to Boston. On April 15, 1887, he petitioned to become a naturalized American citizen, giving his occupation as "philosopher." The oath of citizenship was administered on June 22, 1895 in Boston.[1][2]

He died on December 20, 1905 in Boston. Hodgson never married, and there are no accounts that he ever practiced law.

In 1884-1885 Hodgson was sent by the Society for Psychical Research (S.P.R.) to India for an investigation into whether Madame Blavatsky used fraudulent means to produce phenomena such as letters from Mahatmas. He presented the "Hodgson Report", which resulted in an international controversy. The report was re-examined by Dr. Vernon Harrison, an expert on forgery, who discredited Hodgson's methods and conclusions.

Through his connection with Professor Sidgwick, Hodgson became a member of the Society for Psychical Research (SPR) in 1882, when it was newly formed.

The American Society for Psychical Research offered him a position as secretary in 1887, and he moved to Boston. His skills as a researcher were respected in Europe, and he was invited to England and France to investigate mediums Eusapia Palladino and Leonora Piper. "The psychologist and psychical researcher James Hyslop dedicated his 1905 book Science and a Future Life, a study of the mediumship of [Leonora] Piper, to Hodgson, writing that Hodgson's research led him to the conclusions defended in the book."[3]