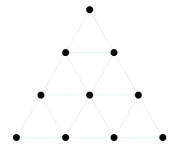 Tetraktys (τετρακτύς) is a Greek word meaning "tetrad". It refers to a triangular figure consisting of ten points arranged in four levels with one, two, three, and four points in each row. This was an important mystical symbol used by the Pythagoreans.

In occult and Pythagorean geometry the Tetrad is said to combine within itself all the materials from which Kosmos is produced. The Point or One, extends to a Line—the Two; a Line to a Superficies, Three; and the Superficies, Triad or Triangle, is converted into a Solid, the Tetrad or Four, by the point being placed over it. Kabalistically Kether, or Sephira, the Point, emanates Chochmah and Binah, which two, are the synonym of Mahat, in the Hindu Purânas, and this Triad, descending into matter, produces the Tetragrammaton, Tetraktys, as also the lower Tetrad.[1]

The Pythagorean general formula of unity in multiplicity, the ONE evolving the many, and pervading the many and the whole. Their mystic DECAD 1 + 2 + 3 + 4 = 10 expresses the entire idea; it is not only far from being “revolting” but it is positively sublime. The ONE is the Deity, the Two matter (the figure so despised by them as matter per se can never be a conscious unity), the THREE (or Triangle) combining Monad and Duad, partaking of the nature of both, becomes the triad or the phenomenal world. The Tetrad or sacred TETRAKTYS, the form of perfection with the Pythagoreans, expresses at the same time the emptiness of all—MAYA; while the DECAD, or sum of all, involves the entire cosmos.[2]

Accoding to Mme Blavatsky the Tetraktys as a symbol can be interpreted on several levels. In its highest application, it stands for the Unmanifested Logos:

The true Pythagorean Tetraktys was the Tetraktys of the invisible Monad, which produces the first Point, the second and the third and then retires into the darkness and everlasting silence; in other words the Tetraktys is the first Logos. Taken from the plane of matter, it is among other things, the lower Quarternary, the man of flesh or matter.[3]

When considering the higher aspect of the manifested cosmos, Mme. Blavatsky inteprets the Tetraktys as formed of the three elements of the Logos plus the primordial matter:

This latter differentiation [of matter] will only appear when it [the Ray] falls into matter, when the Triangle becomes a Square, the first Tetraktys.[4]

Mme. Blavatsky maintained that the tetraktis alone (that is, four elements) cannot account for the whole manifested cosmos. Within it there are two tetraktys, one representing the higher aspect and another one for the lower planes of the universe. In her view, exoteric religions usually talk about the lower Tetraktys, involving the world of forms:

“The Pythagorean world,” Plutarch tells us (in De anim. procr., 1027) “consisted of a double quaternary.” This statement corroborates what is said about the choice, by the exoteric theologies, of the lower Tetraktis. For:—“The quaternary of the intellectual world (the world of Mahat) is T’Agathon, Nous, Psyche, Hyle; while that of the sensible world (of matter), which is properly what Pythagoras meant by the word Kosmos—is Fire, Air, Water, and Earth. The four elements are called by the name of rizomata, the roots or principles of all mixed bodies,” i.e., the lower Tetraktis is the root of illusion of the world of matter; and this is the tetragrammaton of the Jews, and the “mysterious deity,” over which the modern Kabalists make such a fuss![5]

The Tetraktys by which the Pythagoreans swore, was not the Tetragrammaton, but on the contrary, the higher or superior Tetraktys.[6]

There is an arrangement of the letters of the Tetragrammaton (the four lettered name of God in Hebrew scripture יהוה‎ or YHWH), where they are inscribed on the ten positions of the tetraktys, from right to left.

In this regard, Mme. Blavatsky said:

The Tetrad is esteemed in the Kabala, as it was by Pythagoras, the most perfect, or rather sacred number, because it emanated from the one, the first manifested Unit, or rather the three in one. Yet the latter has been ever impersonal, sexless, incomprehensible, though within the possibility of the higher mental perceptions.[7]