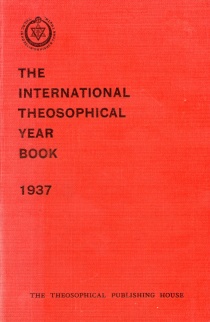 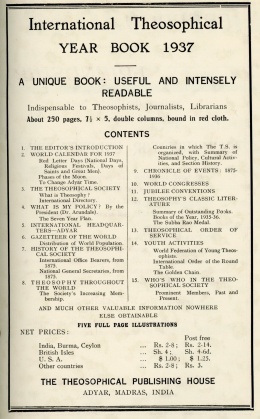 Advertisement in Nov. 1936 The Theosophist

The International Theosophical Year Book was a serial publication issued by the Theosophical Society based in Adyar, Chennai, India for six years - 1937-1942 - during the administration of George S. Arundale. The focus of the year book was to provide the status and activities of the Adyar Society throughout the world, and it also served as a fact book and almanac. This series is particularly valuable for its glimpses into the status of each national section leading into Second World War. Little mention is made of other organizations in the broader Theosophical Movement.

The contents of the year books varied somewhat from year to year according to the needs of the organization. The first issue in 1937 had these departments: