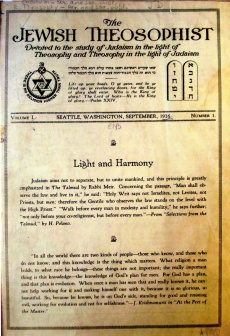 The Jewish Theosophist was a periodical briefly published by American Henry C. Samuels of Seattle, Washington, on behalf of the Association of Jewish Theosophists. Eight issues were produced from September 1926 to December 1932. Articles focused on the relationship between the teachings of Judaism and those of Theosophy. Some were reprinted from other Theosophical journals. According to the editor:

The Jewish Theosophist is International in scope, and is directed to the practical side of life. It deals primarily with progressive and constructive though, presenting various interesting subjects that are appealing and up to the times. It is a Jewish magazine of recreation and education, dealing with things that we really wish to know.[1]

No index has been published online for this periodical, but scans of some issues are available at the IAPSOP website.