Transactions of the Blavatsky Lodge (book) 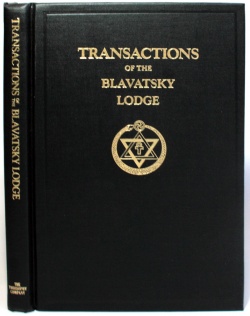 History of the Transactions

The Prefatory Note in the 1923 edition stated:

The following transactions are compiled from shorthand notes taken at the meetings of the Blavatsky Lodge of the Theosophical Society, from January 10th to June 20th, 1889, being somewhat condensed from the original discussions.

"The Secret Doctrine" being based upon the archaic stanzas of the "Book of Dzyan," and these being too abstruse for most of the new students of Exoteric philosophy, the members of the "B.L. of the T.S." agreed to devote the debates of the weekly meetings to each stanza and sundry other meta-physical subjects.

The questions were put by members who, for the most part, supported their objections and exceptions on modern scientific grounds, and assumed logical deductions based thereon. As such objections are generally the common property of students of "The Secret Doctrine," it has been judged unnecessary to incorporate them in full, so that their substance alone has been retained. The answers in all cases are based on the shorthand Reports, and are those of Esoteric Philosophy as given by H.P.B. herself.

The Publisher's Notice in the 1923 edition stated:

H. P. B. was urged to reply to these questions and yielding to the insistencies of the students, she attended many of the meetings of the BLAVATSKY LODGE during the first half of 1889. The Questions propounded to her cover a very wide range, for they were formulated by intelligent, thoughtful, and highly educated men and women. Her Answers were given orally, but were stenographically reported and afterwards revised by her for their publication in the two TRANSACTIONS issued, No. I in 1890, And No. II in 1891.

In 1931, William Kingsland wrote to Henry T. Edge concerning the Transactions. Both men were students of HPB.

I am also pleased to be able to answer your questions about the "Transactions of the Blavatsky Lodge." To the best of my recollection H.P.B. was present at every one of these meetings. The "Transactios[sic]" were partly compiled from notes taken of the answers at the time; but every one of them were revised by H.P.B. before they were printed. They are not verbatim as given by her at the time. They are in every way authentic as her own answers.[1]