From Theosophy Wiki
(Redirected from Try)
Jump to: navigation, search 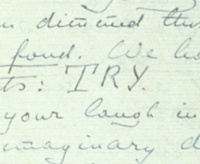 Try! is an injunction frequently used by the Masters of Wisdom in their communications to aspirants and disciples. In a general sense, it is used to encourage the aspirant to keep trying in his treading of the Occult Path. Energetic effort as a universal force propels life on the spiritual path.

Between the months of March and August of 1875 Colonel Olcott began to receive various letters from Master Serapis who was known for his simple exhortation – "Try".[1] For example, a message from this Adept transmitted by Master Hilarion closes with the words: "Try, try—try!"

Serapis Bey also wrote a letter to Henry Steel Olcott, of which remains only a brief note from the end that seems to have been appended by Tuitit Bey. He referred to a mundane matter of getting a pamphlet published, exhorting Olcott to Try to help Madame Blavatsky: "Try. Her duty to pay for it – yours to suggest it and help her."[2]

Note by Tuitit Bey on Letter No. 25 to Olcott
.

In a letter to A. P. Sinnett, Master K.H. wrote: "We have one word for all aspirants: TRY".[3] The advice is repeated in another letter to Mr. Sinnett:

. . .at all events Try. “Nothing was ever lost by trying.” . . . We have our own peculiar modes of expression and what lies behind the fence of words is even more important than what you read. But still — TRY.[4]

Similarly, in a letter to Mohini the Master says ". . . go forward to your end thro’ all obstacles and overbearing all opposition. Try and you will succeed".[5]

H. P. Blavatsky received such an exhortation from Master K. H. at the end of Letter No. 20 in Mrs. Holloway and the Mahatmas.

Another case can be found in the closing of a letter to Francesca Arundale: "Try, child, HOPE, and accept my blessings".[6]

Finally, in one of her instructions to the members of the Esoteric Section, Mme. Blavatsky quotes the words of one of the Masters, who said: "THINK; and thinking, TRY: the goal is indeed worth all the possible effort".[7]

The principle behind this injunction is the idea that all the aspirant should do is to earnestly try to lead a spiritual life, regardless of how successful he is in his attempt. In Mme. Blavatsky's words:

With each morning's awakening try to live through the day in harmony with the Higher Self. "Try" is the battle-cry taught by the Teachers to each pupil. Naught else is expected of you. One who does his best does all that can be asked.[8]

. . . be not discouraged, but try, ever keep trying; twenty failures are not irremediable if followed by as many undaunted struggles upward.[9]

Failure in a particular endeavor may come from causes generated in the past, but if the aspirant keeps trying earnestly, he is doing all he is expected to do, and success will eventually crown his efforts.

The attitude encouraged by this exhortation is based on what Master K.H. mentioned in one of his letters, about--

. . .the basic law of esotericism that personal psychic growth accompanies pari passu [hand-in-hand with] the development of individual effort, and is the evidence of acquired personal merit.[10]

Mme. Blavatsky wrote about this law in the Third Fundamental Proposition of The Secret Doctrine, as follows:

The pivotal doctrine of the Esoteric philosophy admits no privileges or special gifts in man, save those won by his own Ego through personal effort and merit throughout a long series of metempsychoses and reincarnations.[11]

Another example is in Mahatma Letter No. 111 in which K. H. says,

If Mr. Crookes would penetrate Arcana beyond the corridors the tools of modern science have already excavated, let him — Try. He tried and found the Radiometer; tried again, and found Radiant matter; may try again and find the "Kama-rupa" of matter — its fifth state. But to find it's Manas he would have to pledge himself stronger to secrecy than he seems inclined to. You know our motto, and that its practical application has erased the word "impossible" from the occultist's vocabulary. If he wearies not of trying, he may discover that most noble of all facts, his true SELF. But he will have to penetrate many strata before he comes to It.

A more specific way in which this exhortation was used in Theosophical literature is in regard to the possibility of entering into relationship with the Masters of Wisdom. For example, in one of his early letters to Col. Olcott, Master Serapis wrote: "He who seeks us finds us. TRY."[12]

At about the same time, Mme. Blavatsky used the injunction in a similar way in a publication that she called "My first Occult shot". In an article signed by "Hiraf", doubts were expressed about whether there were in existence "regular colleges for the neophytes of this Secret Science". In her answer she wrote:

As in the primitive days of Socrates and other sages of antiquity, so now, those who are willing to learn the Great Truth will find the chance if they only “try” to meet someone to lead them to the door of one “who knows when and how.”[13]

A few months later she repeated:

To fervent and persevering candidates for the above science, I have to offer but one word of advice, "Try and become".[14]

In other instances, this exhortation is an encouragement for aspirants to make an effort in a particular direction, in order to develop some aspect of the inner life. An example of this is a letter to Colonel Olcott where Master Serapis wrote:

For he who hopes to solve in time the great problems of the Macrocosmal World and conquer face to face the Dweller, taking thus by violence the threshold on which lie buried nature’s most mysterious secrets, must Try, first, the energy of his Will power, the indomitable resolution to succeed, and bringing out to light all the hidden mental faculties of his Atma and highest intelligence, get at the problems of Man’s Nature and solve first the mysteries of his heart.[15]

The reference here is to the awakening of "will power", the reflection in us of a universal force that is able to produce effects when set in motion. Master K.H., referring to William Crookes' experiments, wrote:

If Mr. Crookes would penetrate Arcana beyond the corridors the tools of modern science have already excavated, let him — Try. . . . You know our motto, and that its practical application has erased the word "impossible" from the occultist's vocabulary. If he wearies not of trying, he may discover that most noble of all facts, his true SELF. But he will have to penetrate many strata before he comes to It.[16]

Finally, in a letter to A. P. Sinnett, the Master writes:

If, throwing aside every preconceived idea, you could TRY and impress yourself with this profound truth that intellect is not all powerful by itself; that to become "a mover of mountains" it has first to receive life and light from its higher principle — Spirit, and then would fix your eyes upon everything occult spiritually trying to develop the faculty according to the rules, then you would soon read the mystery right.[17]

In one of her articles, Mme. Blavatsky uses this expression as a kind of "password" to go from one stage of inner development to the next. She wrote:

A Rosicrucian had to struggle ALONE, and toil long years to find some of the preliminary secrets—the A B C of the great Cabala—only on account of his ordeal, during which were to be tried all his mental and physical energies. After that, if found worthy, the word “Try” was repeated to him for the last time before the final ceremony of the ordeal. When the High Priests of the Temple of Osiris, of Serapis, and others, brought the neophyte before the dreaded Goddess Isis, the word “Try” was pronounced for the last time; and then, if the neophyte could withstand that final mystery, the most dreaded as well as the most trying of all horrors for him who knew not what was in store for him; if he bravely “lifted the veil of Isis,” he became an initiate, and had naught to fear more. He had passed the last ordeal, and no longer dreaded to meet face to face the inhabitants from “over the dark river.”[18]

By H. P. Blavatsky to a friend

In a letter to her friend, Prince Alexander Mikhailovich Dondukov-Korsakov, written on December 25, 1882, Mme. Blavatsky exhorted him to make use of a remedy she had provided:

Do not forget, my Prince, to wear the talisman (the excrescence of the elephant). It is in the tobacco box in an envelope. I swear it will bring you happiness and the desired relief Try.[19]

Annie Besant used the word in the policy of her periodical The Commonweal highlighting the idea that the very attempt at doing something noble, even if it fails, has an inherent value. She wrote:

We would fain be the voice of the dumb, the defender of the oppressed, the reformer of evil, the upholder of righteousness. It is a great ambition; but "it is better to try nobly and to fail, than ignobly not to try at all."[20] 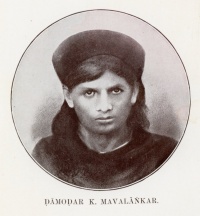 I taught dear Damodar to swim, who was up to a certain point one of the greatest cowards I ever saw in the water. He would shiver and tremble if the water was half-knee high, and you may believe that neither H.P.B. nor I spared him our sarcasms. I remember well how all that changed. "Fie!" said I. "A pretty adept you will make when you dare not even wet your knee." He said nothing then, but the next day when we went bathing he plunged in and swam across the stream: having taken my taunt as meant, and decided that he should swim or die. That's the way for people to grow into adepts. Try, is the first last, and eternal law of self-evolution. Fail fifty, five hundred times, if you must, but try on and try ever, and you will succeed at the end. "I cannot" never built a man or a planet.[21] 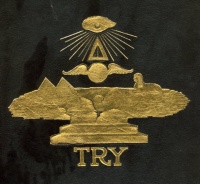 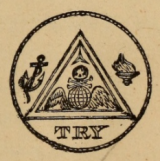 From title page of Randolph book

Rosicrucian R. Swinburne Clymer used the word TRY printed in gold on the covers of his books that were published through the Philosophical Publishing Company. Paschal Beverly Randolph used the same image on some covers, and a simpler rendition on title pages at his Randolph Publishing Company. The necessity of individual effort is emphasized throughout the teachings of Rosicrucianism, Hermeticism, and other occult philosophies.