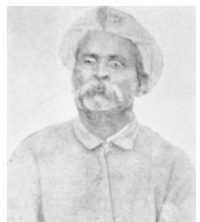 Tookaram Tatya (also spelled as Tukaram Tatya) (1836-1898) was a cotton commission merchant and active member in the municipal and political affairs of the city of Bombay who became an early, prominent member of the Theosophical Society.

On April 9, 1880, Mr. Tatya contacted Col. Olcott and presented an introductory letter from Mr. Martin Wood, editor of the Bombay Review. He was formally admitted into the Theosophical Society the next month, on May 2, and became a trustee of the organization.

On June 5, 1886, Mr. Tatya wrote a cordial letter to Col. Olcott. After touching upon several subjects, he asked for news of Damodar, who had gone to Tibet on February 23, 1885 to join his Master. While the letter was passing through the post, Master K.H. added a note to it by phenomenal means.

The letter with its precipitated note is available as Letter 29 in the First Series of Letters from the Masters of the Wisdom. Although Col. Olcott was actually the recipient of the message, it is evidence that the Mahatmas were interested in Mr. Tatya and found his inquiry worthy of response.