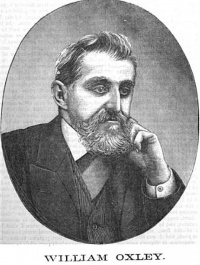 William Oxley (May 1, 1823 - 1905) was born at Doncaster, Yorkshire, England. Since early 1870s he became a Spiritualist in Manchester and frequently used the pseudonym "Busiris". He joined the Theosophical Society although later resigned, becoming a critic of it.

On June 24, 1881, Mr. Oxley wrote a long letter to Mahatma K.H. telling him about his spiritualistic contacts. The Master was apparently a bit amused by it and made some marginal notes on it in a lighter vein and sent it to Mr. Sinnett. It is in Folio 6 in the British Library.

Oxley claimed to have been visited three times by the astral form of Master K.H., which was denied by him.[1]

At some point he wanted to join the Simla Eclectic TS but the Master K.H. refused him at first. However, on September 1882 the Master wrote to Mr. Sinnett:

Kindly write to him to say that he must not feel vexed at my denial. I know he is thoroughly sincere and as incapable of a deception or even exaggeration as you are. But he trusts too much to his subjects. Let him be cautious and very guarded; and, if he joins the Society I may help and even correspond with him through you. He is a valuable man, and indeed, more worthy of sincere respect than any other Spiritualistic mystic I know of. And though I have never approached him astrally or conversed with I have often examined him in thought.[2]

Oxley eventually became a member of the Theosophical Society although later resigned from it.

The Philosophy of Spirit

Mr. Oxley was the author of several books, among which was the Philosophy of the Spirit, announced as "a New Version of the Bhagavat Gita". A review by "The Literary World" critized the fact that he gives "a translation of a translation" and added that the book was "so overlaid with the editor's strange compound of spiritualistic and astrological philosophy that [the readers] will lose all patience with it."[3]

The book was also reviewed rather negatively by Djual Khool in The Theosophist, vol 3, December 1881 (p. 62). Oxley took exception to this, and published an answer in the issue of March 1882 (p. 150).

An answer by William Oxley was published in September 1882 (p. 298) under the title The Philosophy of Spirit - Hierosophy, Theosophy & Psychosophy, to which Mme. Blavatsky appended more footnotes. In the same issue (page 301) "Gjual-Khool M * * *" wrote a "Letter, re W Oxley".

From 1875-1885, Oxley published five volumes of Angelic Revelations: Concerning the Origin, Ultimation, and Destiny of the Human Spirit . In the introduction to Volume 1 he stated:

As these volumes of Angelic Revelations are not for sale, but are printed at the expense of a few friends for gratuitous distribution to Public Libraries, Masonic Societies, and to those who can appreciate the Esoteric and Spiritual Philosophy therein propounded, and endeavor to live out the same in a pure and beneficent disposition, it is respectfully requested that no undue advantage will be taken, by submitting them to public criticism in the Press. They are not issued in the interest, or as the official expositions of doctrines of any sect or society; for, as a matter of fact, the little representative number to whom these remarkable revelations were made, is now non-existent in its concrete form, and the members are scattered, so that they go forth on their own errand, and the result is left to the guidance of those Invisible Beings from whom they emanated.

It is available online at Internet Archive and at Open Library. In one of the volumes he gives accounts of Elizabeth Hope Reed, whose pseudonym was Elizabeth d'Esperance, a nonprofessional medium.