Difference between revisions of "Constance Wachtmeister" 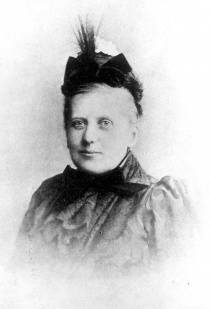 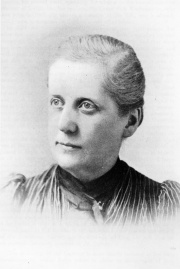 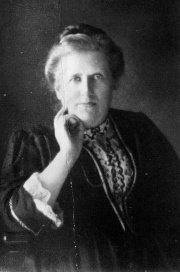 Constance Georgina Louise Bourbel de Monpincon was born in Florence, Italy on March 28, 1838, to a French father and an English mother. [2] Constance lost her parents at an early age and was sent to England to her aunt, Mrs. Bulkley of Linden Hall, Berkshire, where she was educated and lived until her marriage in 1863 with her cousin, the Count Wachtmeister, then Swedish and Norwegian minister at the court of St. James. They had a son, count Axel Raoul, who was born in 1865. The family moved to Stockholm, Sweden, when the Count was appointed as the Minister of Foreign Affairs. Countess Wachtmeister’s husband died in 1871. [3] 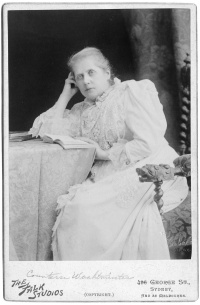 After reading Blavatsky's work Isis Unveiled with wonder and admiration as well as other Theosophical books, and joining the Theosophical Society, Constance Wachtmeister met H.P.B. for the first time in early 1884 in London at the home of A. P. Sinnett and his wife Patience. Soon after she received a letter from Blavatsky asking Wachtmeister to visit her in Paris. She decided to go before returning home to Sweden and at that occasion also met the Society's Vice President, William Quan Judge. When she finally had a private conversation with H.P.B., she was told that before two years had passed, she would devote her life wholly to Theosophy, which seemed impossible to Constance Wachtmeister at that time.[12]

She happened to be in Germany when H.P.B. came there from India in 1884 and was ready to serve by entering H.P.B.’s household as an all-around helper and answering H.P.B.’s letters. She was attracted to Blavatsky's indifference to praise or blame, to her sense of duty not to be shaken by any selfish considerations. She worked faithfully for H.P.B. until her death.[13]

The countess served H.P.B. in the years when she wrote The Secret Doctrine and in Constance Wachtmeister’s own book Reminiscences of H.P.B. she writes about the remarkable phenomena she was privileged to see during the preparation of this work.[14] During these years she became a close friend of H.P.B. and stood by her in time of great distress and anxiety, both physical and social.[15]

To her is also due the credit for the successful establishment of the Theosophical Publishing Society in London. The T.S.P. had been organized to publish The Secret Doctrine and other Theosophical books and magazines. The countess had become seriously involved financially in this endeavor.[16]

On one or other of his early visits to Europe, Countess Wachtmeister also met Master Morya. H. P. B. mentions the fact in a letter to Mr. N. D. Khandalvala, dated July 12, 1888:

Constance Wachtmeister joined the T.S. because she recognised in the portrait of my Master her living Master who saved her on several occasions, whom she saw in his physical body years ago when he was in England, whom she saw in his astral body a number of times, and who wrote to her from the first in the same handwriting he uses for our Society. When she assured herself of this, she joined the T.S. at his advice; and now for three years and more she lives with and takes care of me."[17] 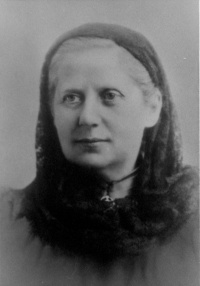 Then I recollected the circumstances that I have related before. From the time I had placed the volume in the bottom of my box it had been out of my sight and out of my mind. Now, when I hurried to the bedroom, unlocked the trunk, and dived to the bottom, I found it in the same corner I had left it when packing in Sweden, undisturbed from that moment to this.[18]

After H.P.B.’s death Countess Wachtmeister came over to America and lectured in Chicago and other places and eventually moved with her son to California to stay. [19]

Her heart and head were filled with the truth of Theosophy and she promoted the organization and teachings tirelessly. She visited every lodge of the T.S. and worked in a number of lodges to share her knowledge. Her time and energy were always at the disposal of the Cause and she helped financially whenever she could. [20] [21] 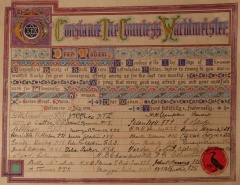 In 1896 she organized and helped build up 12 branches, besides visiting the existing old ones. In some places, as in Chicago for example, where she gave paid lectures she handed over the profits to the lodge. She lectured in every town where there was a possibility of hearers. She did not only lecture in the U.S. but also in Europe, Australia and in India, where she traveled with Annie Besant.[22] On the left is a certificate for Countess Wachtmeister expressing appreciation for her work at the TS of South Yarra (a lodge in a suburb of Melbourne), Australasian Section. It is dated July 1895 and signed by members of the lodge. 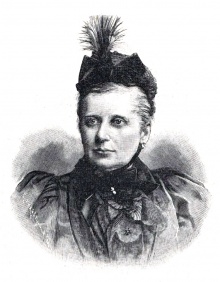 She further wrote that H.P.B. used to wear a ring that was important to her and had told the Countess that it would go to her successor and that the properties attached to it were magnetic. When I found out that the ring had been given to Annie Besant by H.P.B.s express directions, I knew that she would be the successor.[23] 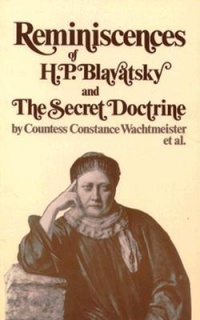 Countess Constance’s only child, Alex Raoul Wachtmeister, was born on April 2nd, 1865 in London. He was a globetrotter and composed an impressive amount of music in all genres. He was only six years old when his father died and already as a young child he traveled with his mother when she was involved in Theosophical matters but also stayed with relatives and friends. Having inherited the desire to travel and being economically independent, he, after finishing his studies, traveled the entire globe taking adventurous trips filled with hardships. He climbed the Great Pyramid of Giza, visited Kashmir and Ceylon, socialized with writers such as Robert Louis Stevenson and Rudyard Kipling. In the company of Swedish author and Nobel Prize winner, Verner von Heidenstam, he searched for traces left behind by the soldiers of Sweden’s King Charles XII in Romania and southern Russia. In 1896 he was in Greece during the first modern Olympic Games. In 1898 he edited the theosophical journal Messenger in San Francisco and wrote a few articles for this and other Theosophical publications. He described many of his adventures and activities in his memoir written in English, Memories from 1936.

Axel Raoul Wachtmeister was active both as a pianist and a composer until the very end of his life. In his older years he lived for a long time in various boarding houses in Stockholm, however his last years were spent in Tyringe (Hässleholm), where he also died.[24][25]