The first publication describing the seven principles in human being was in "Fragments of Occult Truth". The information came as a result of his correspondence with some of the Mahatmas, part of which was published in the book The Mahatma Letters to A. P. Sinnett. Below is his description: 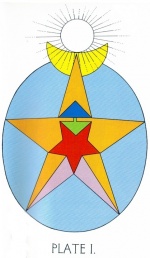