Difference between revisions of "Vivekananda" 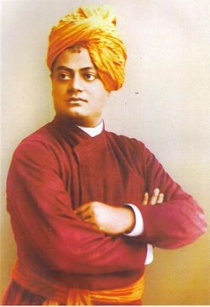 Swami Vivekananda (12 January 1863 – 4 July 1902) was an Indian Hindu monk and disciple of Ramakrishna. He introduced Hinduism at the World's Parliament of Religions in Chicago in 1893, and founded the Vedanta Society of New York in 1894.

Travels in the West 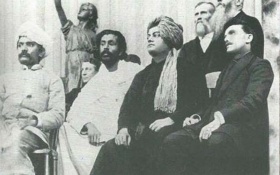 Vivekananda with Anagarika Dharmapala in 1893

Vivekananda and the Theosophical Society shared many ideals and goals, but misunderstandings and distrust marred the relationship.

Annie Besant, on hearing the Swami speak at the Parliament, wrote appreciatively:

A striking figure, clad in yellow and orange, shining like the sun of India in the midst of the heavy atmosphere of Chicago, a lion head, piercing eyes, mobile lips, movements swift and abrupt - such was my first impression of Swami Vivekananda. All was subdued to the exquisite beauty of the spiritual message which he had brought, to the sublimity of that matchless truth of the East which is the heart and the life of India, the wondrous teaching of the Self. Enraptured, the huge multitude hung upon his words; not a syllable must be lost, not a cadence missed! "That man, a heathen!" said one, as he came out of the great hall, "and we send missionaries to his people! It would be more fitting that they should send missionaries to us!"[1]

Vivekananda's influence would not have been possible without the pioneering work of the Theosophical Society. Scholar E. De Michelis wrote that Vivekananda--

... Capitalized on the interest in Indian religions generated by the academic study of religion and, even more so, by the popularization of Oriental ideas carried out by occultist groups such as the Theosophical Society.[2]

Vivekananda was a Freemason, according to the website of Shillong Freemasons Lodge #61.[3]

The Union Index of Theosophical Periodicals lists 31 articles by or about Swami Vivekananda.