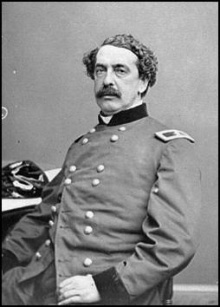 Abner Doubleday was an American general who was an important member of the Theosophical Society in its earliest years.

Doubleday was born in a one-room house in Ballston Spa, New York, on June 26, 1819. After attending a private preparatory school in Cooperstown, New York, the young man worked for two years as a surveyor and civil engineer. His father and both grandfathers were all army veterans, and Doubleday obtained an appointment to the United States Military Academy at West Point. More detail is available in a well-documented article in Wikipedia.[1]

After graduating from West Point in 1842, the young Doubleday served in the Mexican-American War and the Seminole wars. In this period he married Mary Hewitt of Baltimore. As a Captain and second in command at Fort Sumter, he participated in the firing of the first cannon, the shot that started the American Civil War on April 12, 1861. He commanded artillery in the Army of the Potomac, seeing action at the Northern Virginia Campaign, the Second Battle of Bull Run, South Mountain, Antietum, and, most notably, Gettysburg. His rise through the ranks was rapid, and he became a major general in March, 1963. He was wounded more than once. Late in the war he mostly held administrative positions in Washington, overseeing courts martial and the defenses of the District of Columbia. 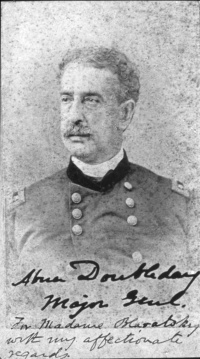 Autographed photograph given to Madame Blavatsky

Due to his significant role in the war, General Doubleday rode on the train with President Lincoln to Gettysburg when the Gettysburg Address was delivered.

General Doubleday was a significant leader in the early history of the Theosophical Society. Sources disagree slightly about the date other he joined the Society, which may have been in 1877[2], but is sometimes given as June 30, 1878. When the Founders, Henry Steel Olcott and H. P. Blavatsky left on December 17, 1878 for India, Doubleday served interim President for a brief period beginning January 17, 1879. He was held in very high regard by Colonel Olcott, but received very little direction in how to carry out his new responsibilities, as documented by historian Michael Gomes. He became Vice President of the TS from 1880-1888. The energy of the American society was diminished by departure of the founders, and hampered by the fact that Olcott had taken the membership list away with him. [3] 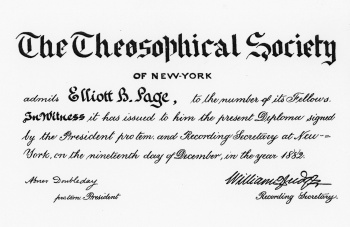 Membership certificate signed by Doubleday and Judge, reproduced in The Path June 1895.

Around 1882 he wrote to Thomas Moore Johnson about the state of the Society:

Circumstances have been very much against us. Some of the difficulties which have impeded our material progress arise from the peculiarities of some of the members who have simply joined to have their appetite for wonders satisfied, but who seem to take but little interest in the philosophy which remedies the subject. I supposed when I accepted the direction of the society that I would have the cordial cooperation of those of the old members who had been associated with H.P.B. and Olcott. Of these I relied most upon Wm. Q. Judge, as he was the best informed and seems at times to receive interior communications from India. He is a pure high-minded and intelligent student of these mysteries, but like a number of others he has had all he could do to keep the wolf from his door. Several of our most valued members are struggling for a bare subsistence, and this necessarily prevents them giving that attention to our organisation which it ought to receive.

Our financial plans – upon which we relied to give us ample means – have not succeeded as yet. With money we could establish a central office here which would be of great value in disseminating the important principles of our philosophy. As it is, we must wait for better times, and make haste slowly. I will call another meeting of the Council and see what can be done.

[post script] There is a good deal of prejudice against us caused by the attacks of the N.Y. Sun and it may be that the Brothers prefer to retard our development rather than hasten it.[4]

Doubleday joined the American Board of Control on May 13, 1884. When the American Section was formed in 1886, in Cincinnati, he was a charter member.[5]

In the United States, General Doubleday is widely called the "father of baseball," and in 1939 he was celebrated in a centenary at Cooperstown, New York, home of the Baseball Hall of Fame. Cooperstown is supposedly the location where Doubleday introduced the game at Doubleday Field. In fact, Doubleday never claimed to have any particular association with the game. Linking the well-known General to the foundation of the American national past-time seems to have been a publicity stunt by sporting goods manufacturer Albert Spalding. For more complete coverage of this topic, see the "Origins of baseball" in Wikipedia, where a section is devoted to the "Abner Doubleday myth."[6]

The General was interested in the work of Éliphas Lévi, and translated it from the French:

[Doubleday] played one of the most important but under-recognized roles in the popularization of Lévi's thought. In June of 1882, he informed [Thomas Moore] Johnson that he had completed the first known English Translation of Lévi's Dogme et rituel de la haute magie (1854-56), and that, if he failed to come to good terms with a New York book publisher, he wanted Johnson to publish it in the Platonist.[7]

However, the translation "was not published in full until the 1910s when it was serialized in The Word magazine.[8]

He is known to have written a manuscript on tarot:

Doubleday is better known for having written several books and reports about the Civil War: 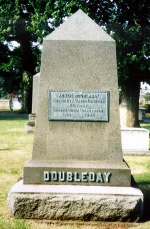 A monument to Doubleday was erected at Gettysburg by his men, admirers, with support from the state of New York.[10] At the site of his burial in Arlington National Cemetery, there is a 7-foot (2.1 m) obelisk monument, pictured at right.

In World War II, a liberty ship was named after him.[11]