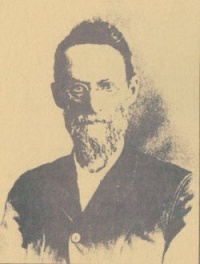 Thomas Moore Johnson (1851-1919) was an American attorney and student of philosophy. Known as the "Missouri Platonist," he lived in Osceola, Missouri and published The Platonist. His periodical mostly comprised translations of Greek works by Alexander Wilder and Thomas Taylor.

Thomas Moore Johnson was born in Osceola, Missouri on March 30, 1851 to Waldo P Johnson and Emily Moore Johnson, who had moved from Virginia. Two younger brothers were St. Clair (possibly named for the county in Missouri) and Charles. Thomas studied law at the University of Notre Dame in Indiana, and then established a practice in Osceola, where he continued to live for the remainder of his life. On May 8, 1881, he married Alice Barr (1861-1948). They had four children: Ralph, Waldo, Helen, and Frank.

Johnson practiced as a successful attorney in Osceola. His sons Ralph and Waldo also became attorneys.

With the encouragement of his friend Alexander Wilder, Johnson became an early member of the Theosophical Society, being admitted on April 17, 1883. He was not attached to a lodge.[1] His membership diploma was signed by Founders Helena Petrovna Blavatsky and Henry Steel Olcott. From 1884-1886, Johnson participated in the American Board of Control that worked to develop the American Section of the Society.

Johnson collected and translated Greek texts, and became a recognized authority on Plato and the Neoplatonists.

The Platonist was an important journal that Johnson published from 1881-1888. Alexander Wilder was co-editor for a time.

The journal included translations of Plato and his Neoplatonic commentators, Greek, Persian and Arabic, and studies of Thomas Taylor, the Alexandrian School, and the like... The journal also, especially after volume 1, published articles, thought by Johnson to relate to Platonism by way of Hermeticism or to reflect the "esoteric doctrine of all religions," by W.Q. Judge of the Theosophical Society (on whose American Board of Control Johnson sat), Alexander Wilder (the perennial Platonist), and by T.H. Burgoyne, C.H.A. Bjerregaard, Henry Wagner, and other fellow members of the H.B. of L., and translations of the Yoga Aphorisms of Patanjali, The Desatir, etc... Although it now seems commonplace for occultism to position itself in the spectrum of ancient wisdom and the prisci theologi, the idea was a challenge to spiritualist orthodoxy at the time.[2]

Its successor was Bibliotheca Platonica, of which Pat Deveney writes: "The journal more strictly restricted itself to translations and avoided the occult contributions that had appeared in and arguably detracted from the scholarly standards of its predecessor. Contributions by Alexander Wilder."[3]

While still a student at the University of Notre Dame in Indiana, Johnson began collecting Greek texts. The University of Missouri-Columbia Libraries was given 1793 volumes out of Johnson's large collection of 8,000 volumes. His son Franklin Plotinos Johnson made the donation in 1947. According to the university website:

“The collection spans the centuries from the ancient Greeks to the nineteenth century philosophers, but the emphasis is on the classical authors, augmented by modern philosophy and criticism. The medieval Christian philosophers are also represented. Since the collector was a Platonist, it is expected that the collection of works of Plato and the critical works would be large.” (The Thomas Moore Johnson Collection, page 3).

The oldest imprint is 1494 and there are several hundred volumes with publication dates from the sixteenth and seventeenth centuries.[4]

Johnson, like most editors of his day, maintained a very active correspondence with many people. Patrick D. Bowen and K. Paul Johnson have compiled T. M. Johnson's letters from esotericists in the first volume of Letters to the Sage, including letters from these people:

A second volume of Letters to the Sage documents a 32-year friendship with Alexander Wilder. It has been made available for free by its editors on Academia.edu.