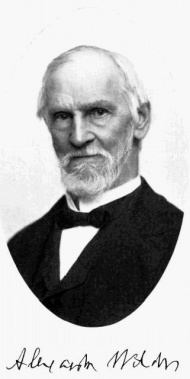 Alexander Wilder (1823-1909) was an American physician and Neoplatonist scholar, and a prominent early member of the Theosophical Society.

Alexander Wilder was born in Verona, Oneida County, New York, on May 14, 1823. His father, a farmer named Abel Wilder, married Asenath Smith in 1808, and they had ten children in eighteen years. The family was strict and Puritanical. The boy and his siblings were educated at the Tildon Hill District School. "Alick" memorized every word of the school textbooks, and was an apt student.

I was passionately desirous to know. I was disposed to ferret out the reason of things. I could not believe a thing right or wrong because anybody said it was... Books were not easily had, and the Newspaper came only once a week and meager at that. But I think that few whom I knew desired books as I did...[1]

The family had few books and the town lacked a library, but in 1935, when the school's library was expanded, the children took full advantage. Alexander, at age 15, joined three brothers and a sister as teachers in the district schools. He studied Latin and Greek to prepare for college, aspiring to become a cleric [his parents' strong preference] or a physician.[2]

The family became "unsettled" when two of the brothers left the Congregational Church to become Baptists. Wilder wrote of his life in 1841:

So by eighteen I was adrift, out of the Church, and seeking knowledge in other directions. It was a period of fearful risk, but I had the mens conscia recti [a mind conscious of integrity], and I must believe the care of Providence to preserve me from the worst of perils. Having been kept in abnormal subjection all my younger years, I knew not how to act wisely or properly for myself. I had first of all to acquire freedom both in thought and action. I was with all my experience, at twenty-one, more simple and artless than most lads at fifteen. I excelled all my equals in book-learning, but I was far behind in the savoir faire.

So for years I kept on feeling my way, blundering, and only extracting myself with much anguish of mind...[3]

Introduction to Mesmerism and Swedenborgianism

I read such literature about it as I could find, and had opportunity to witness anaesthesia produced by manipulation. I also read about clairvoyance resulting from it. Some years afterward I consented to become the subject of such experimentation, and have had abundant reason for regret. It developed a sensitiveness acute even to abnormity, and the power of will, already too much weakened in early life, was still further affected...

What little I learned and observed in Mesmerism opened the fact to perception that there is a spiritual region to which we really belong, and with which, under certain conditions, we may have perceptible intercourse. It may be heaven or hell, but that depends upon our own state of mind. There are no rewards or punishments, except as they are incident with ourselves. It took me long to learn that. The Calvinistic notion held me for years, and, indeed, was about the last that I was able to discard.

In the field of mind, spirituality and the higher knowing, I made haste very slowly. I sought information from everyone and conscientiously examined it, unwilling to accept anything blindly. I exercised the reasoning faculty, but sought to be open to the superior sense.

From 1844 to 1851, I drifted from one place and employment to another—part in Massachusetts, and part at my father’s in New York. My religious experiences consisted in becoming disentangled from the various beliefs and opinions which for a few years had held me fast, and in the endeavor to learn more of the world of reality. Prompted by a lady who had been one of my teachers in boyhood, I procured and read with interest the philosophical and theological works of Emanuel Swedenborg.

To this day I esteem the philosophic doctrine of Swedenborg the most perfect that has been promulgated in modem times. I cannot, however, subscribe to many of the constructions which have been placed upon them, and I have never been able to comprehend intelligently the principle upon which he interpreted the books of Genesis, Exodus and the Apocalypse. I have since become a student of the Platonic Dialogues, with which he seems to have in many respects to have been en rapport. But with all their profundity and fulness they strengthen rather than weaken my regard for Emanuel Swedenborg. Despite all that may be said captiously or sneeringly of his peculiar statements and methods, he is most emphatically the philosopher of common sense.[4]

The young man tried farming to please his father, then worked as a typesetter and a lumberjack. Always interested in medicine, Wilder sent to Syracuse in January 1851 to attend a medical meeting. "I had already taken part in forming a medical society in Oneida county and served two years as its secretary." The new Syracuse Medical College was lacking in instructors, and Wilder was asked to give a lecture on the physiology of the cells. He taught briefly at the college, but the pay was meager and Wilder's views of medical treatment were not in accord the rest of the faculty. After a year working as a compositor at a newspaper, Wilder was appointed as editor of a monthly journal for a State Association of teachers. He conducted Teachers' Institutes [training] in Illinois and New York, and helped establish the Normal School [teacher training college] at Bloomington, Illinois. Then in 1857, he taught for a year in the School of the Society of Mechanics and Tradesmen. Finally in 1857 he found an occupation that continued for thirteen years, as a report on the Evening Post.[5]

It was during this period that he was able to complete his higher education, and was graduated at the age of 44 in 1867 from Homeopathic Medical College of New York. Meanwhile, for several sessions of the state legislature, Wilder served as clerk of a committee, meeting many prominent politicians of the day. In 1871 he was made a candidate for Alderman in New York, in the movement against the Boss Tweed political machine, serving one term.

He lived in New York for some years, but by 1880 had moved to Newark, New Jersey, where the air was more healthful.[6][7] 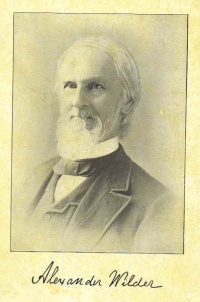 From about 1873 until 1877, Dr. Wilder held a professorship, rather unwillingly, at the Eclectic Medical College of the City of New York. He was secretary of the National Eclectic Medical Association from 1876-1895. After the United States Medical College formed in 1878, he took the chair of Physiology, switching in two years to a new professorship of Psychology and Magnetic Therapeutics. Shortly after that he was relieved to move away from his academic career, unimpressed with medical colleges "as schools of morals or as promoters of financial probity."[8]

In his time, Dr. Wilder was a well-regarded physician due to his writings and teaching, but he never became wealthy or famous.

He was editor of at least three medical publications, including 19 vols. of "Transactions of the National Eclectic Medical Association," of which organization he was Secretary. He also published in 1901 the 946 pp. "The History of Medicine." Wilder's viewpoint in medicine was that the Spiritual, Psychological and Physical nature of man was one thing and that medical practice must include all. Today he would probably be regarded as a practitioner of Holistic Medicine.[9]

During 1886 and 1887, H. P. Blavatsky wrote her first major work, Isis Unveiled and then reworked it with the assistance of Colonel Olcott. She wrote,

When the work was ready, we submitted it to Professor Alexander Wilder, the well-known scholar and Platonist of New York, who after reading the matter, recommended it to Mr. Bouton for publication. Next to Colonel Olcott, it is Professor Wilder who did the most for me. It is he who made the excellent Index, who corrected the Greek, Latin, and Hebrew words, suggested quotations and wrote the greater part of the Introduction 'Before the Veil.' If this was not acknowledged in the work, the fault is not mine, but because it was Dr. Wilder's express wish that his name should not appear except in footnotes. I have never made a secret of it, and every one of my numerous acquaintances in New York knew it." [12]

As Boris de Zirkoff pointed out,

"Many statements by HPB, particularly in Isis Unveiled, the Key and the Glossary are taken from Dr. Alexander Wilder's small booklet: New Platonism and Alchemy, Albany, N.Y., 1869.[13]

Dr. Wilder's life is an example of the ability of man to live through difficulties endure hardships and overcome obstacles. . .

His wide learning and readiness to put it to the service of others, his sincerity of purpose and honesty in thought an action, together with his unflagging energy interest in affairs and his lofty ideals, commanded the honor and respect of all and endeared him to most men who knew him.[14]

Mark Jaqua compiled published four volumes of correspondence and articles from many sources:

The Union Index of Theosophical Periodicals lists over 60 articles by or about Wilder. In addition, he contributed many articles to Metapyhsical Magazine and The Word.

He served as editor of these works: