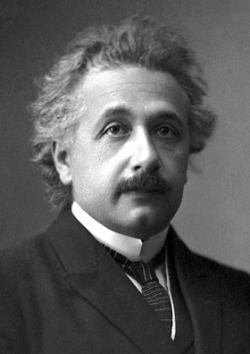 Albert Einstein (14 March 1879 – 18 April 1955) was a German-born theoretical physicist who developed the general theory of relativity. He is also best known for his mass–energy equivalence formula E = mc2.

Einstein and The Secret Doctrine

In the Summer of 1974 The Journal of San Diego History published an interview to Theosophist Iverson L. Harris, where he stated that A. Einstein had a copy of Madame Blavatsky's book The Secret Doctrine on his table all the time.[1] In 1993 Sylvia Cranston wrote in her book H.P.B. The Extraordinary Life and Influence of Helena Blavatsky the following:

In checking this information it was learned that a niece of Einstein’s, in India during the 1960s, paid a special visit to the headquarters of the Theosophical Society at Adyar. She explained that she knew nothing of theosophy or the society, but had to see the place because her uncle always had a copy of Madame Blavatsky’s Secret Doctrine on his desk. The individual to whom the niece spoke was Eunice Layton, a world-traveled theosophical lecturer who happened to be at the reception desk when she arrived. While in Ojai, California, in January 1982, Sylvia Cranston met Mrs. Eunice Layton, who confirmed the story.”[2]

Leon Maurer states that around the mid 1970s he was attending a lecture by a foreign visitor at the United Lodge of Theosophists in New York City where he met a group of women. One of them claimed she was present when Einstein's niece arrived at Adyar, adding that the latter had brought the copy of The Secret Doctrine to donate it to "the library of the Lodge in Adyar". This woman said she actually opened the book, which "was heavily notated and underlined, and that the margins were covered with scribbles and other markings that none of them could make heads nor tails of".[3] However, neither the Adyar Library [4] nor the Adyar Archives has this volume.[5]

Scholar David Reigle said he and his wife talked to Eunice Layton, who confirmed the story about Einstein's niece having visited Adyar and mentioned about his copy of The Secret Doctrine, but Mrs. Layton never mentioned having seen the book.[6]

It is also unclear whether Albert Einstein had a niece. His sister Maria "Maja" Einstein had no children,[7] and the same seems to be the case with his first wife's siblings.[8] Some speculate that this "niece" could have been his secretary, Helen Dukas, who became his housekeeper after Einstein's wife died, and was made one of the executors of his estate.[9]

An independent account regarding this volume of The Secret Doctrine was given by Jerry Hejka-Ekins. The latter knew Dr. Alfred Taylor, once director of the Krotona School of Theosophy, and alleged personal friend of Einstein. According to Mr. Hejka-Ekins, Dr. Taylor described on several occasions Einstein's enthusiasm for the book, to which he referred as his "bedtime reading."[10]

Finally, Jack Brown in his article “I Visit Professor Einstein” published in Ojai Valley News, says he saw the volume on Einstein's desk and exchanged some thoughts with him about it. According to him, Einstein said:

I have even told professor Heisenberg, my fellow physicist, to get a copy [of The Secret Doctrine] and keep it on his desk. I urged him to dip into it when he’s handicapped by some problem.[11]

The veracity of the claims found in this publication have been challenged by Barbara Wolff, from the Albert Einstein Archives at the Hebrew University of Jerusalem.[12]