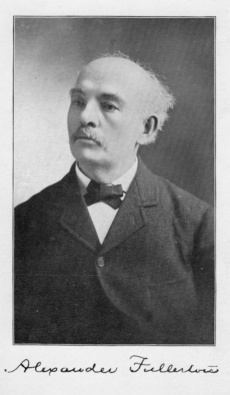 Alexander F. Fullerton was an American clergyman who served from 1895-1907 as the first General Secretary of the American Theosophical Society.

Fullerton was born on September 12, 1841 in Philadelphia, and was baptized as a teenager on March 20, 1859 at an Episcopal church, St. James the Less.[1] His parents, Alexander and Sarah A. (Cruickshank) Fullerton, owned substantial property and kept a large household, usually with 4-5 Irish woman as servants. The children included daughter Hester, sons Edward and Spencer, and another relative, Elizabeth Clement, who lived with them for many years.[2][3]

Alexander attended Princeton University during the Civil War, entering in 1860 and completing his studies in 1864.[4] In 1863, Congress instituted a conscription law, the Enrollment Act, and young Fullerton registered for military service.[5] There is no evidence that he was called to serve, however. Following graduation in 1864, he became an Episcopal clergyman for ten years.[6]

He was ordained Deacon in the Episcopal Cathedral Church, Burlington, New Jersey, in June, 1865; had charge of Trinity Church, Princeton, New Jersey, for three months; was Assistant at St. Stephen's Church, Philadelphia, till July, 1866, when he went to Europe for a year but upon his return was again Assistant at St. Stephen's He became Rector of Christ Church, Oak Park, Illinois, and held this post for one year and again returned to Stephen's, Philadelphia. As of 1870, he was living in Philadelphia in a household with his mother, brother, and sister, with four servants.[7]

in 1875, at his own request, Mr. Fullerton was deposed from the ministry of the Episcopal Church. He then took up the study of law at the University of Pennsylvania and graduated in June, 1877. He never applied for admission to the bar and spent most of the next five years in Europe, being much attracted to Italy. In 1882 he returned to the United States and settled in New York City. About this time he became interested in the work of the Civil Service Reform Association and for three years he gave his services gratuitously to this cause, being associated with George William Curtis, Theodore Roosevelt and other prominent men...[8]

He wrote How You May Aid Civil-service Reform in 1882.

Involvement with the Theosophical Society

Fullerton joined the Theosophical Society in May, 1887. When asked later why he had espoused Theosophy, he said:

I have been steadily prepared for Theosophy by passing through Presbyterianism, Episcopalianism and Unitarianism, and when I encountered Theosophy in Esoteric Buddhism and The Occult World instantly seized the doctrines of karma and reincarnation. Other parts of the scheme were less assured, but further thought and reading convinced me of them and I have grown in perception of its truth and beauty. I have, however, no sympathy with the pantheistic tendency of a school in the T. S., but hold most vigorously to the fact of a real God, not a phrase or a term. My experience was an intellectual perception of karma and reincarnation, then a soulful response to their lessons, then a thorough identification of spirit and aim with their purport.[9]

He spent some time at Adyar, and because of his generosity became known as the "Fairy Godfather" of the Panchama Schools that were founded by Colonel Olcott to educate the children of the poorest classes. The following year he became the Assistant General Secretary of the American Section, of which William Quan Judge was the General Secretary. For eight years he handled Mr. Judge's correspondence, managed the office, and edited a monthly journal. He was on the Executive Committee and also served as Secretary/Treasurer until 1895.

In March, 1895, Fullerton became a trustee of the American Asiatic and Sanskrit Revival Society.[10]

Mr. Fullerton was much in demand as a speaker. A tall man at 6 feet, 2 inches (1.88 meters), he made a dignified presentation. Often he addressed topics of interest to a predominately Christian public, such as connections between Theosophy and Jesus. 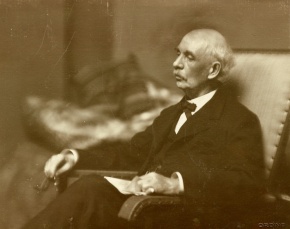 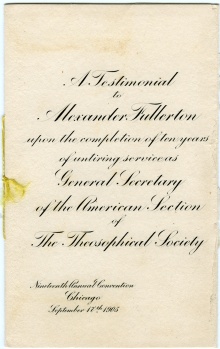 Presidency of the American Theosophical Society

Following the division of the American Theosophical movement, Fullerton was asked by international President-Founder Henry S. Olcott to re-form the American Section. The seceding group had taken all the records and property of the old Section. Members of the few lodges that remained loyal to the Adyar administration elected Fullerton as General Secretary of the new American Theosophical Society. He worked ceaselessly to build a new organization. Headquarters remained in New York. A Propaganda Fund was established to maintain American lecturers in the field, and an effective scheme of mailing tracts and pamphlets was implemented. Lecture tours by international figures such as Annie Besant, Constance Wachtmeister, and Charles Leadbeater helped to establish new lodges and a rapidly growing membership. The number of lodges grew from fourteen to seventy over a period of twelve years.

A periodical originally conceived as a children's magazine, Mercury, became the official monthly organ of the Section, beginning with the August 1895 issue. Published by a member in San Francisco, it was "dedicated to the study of Oriental philosophy, the Occult Sciences and the Brotherhood of Man." In 1900, that journal was replaced by The Theosophic Messenger.[11]

Mr. Fullerton was much appreciated by the American members for his unselfishness, sense of humor, generosity, and steady adherence to his ideals. At the 1905 Convention, he was given a special testimonial honoring his ten years of devoted service to the American Theosophical Society. In 1907 he was succeeded by Dr. Weller Van Hook as General Secretary of the American Section.

Vivid recollections of Alexander F. Fullerton, ardent theosophist and 70 years old, were told in testimony in … court yesterday. His belief in his various reincarnations formed the moving cause in a suit in which his brother, Spencer L. Fullerton, and Foster Milliken seek to set aside a trust fund of about $20,000 [in another account, $40,000 of American Smelter stock][12] created for himself during his lifetime and after his death for Henry Hotchner, who resigned as secretary to Simon Guggenheim to become a lecturer on theosophy; Walter Schuyler Ladd of Denver and the Theosophical Society at Adyar, Madras, India.

A year ago A. F. Fullerton was a patient in a sanitarium at Flushing and it is asserted that he was insane when he created the trust fund… Dr William B. Pritchard… who examined Mr. Fullerton prior to his commitment, testified regarding his condition

"When I called upon Mr. Fullerton," said Dr. Pritchard, "he told me of his graduation from Princeton, his confirmation as an Episcopal clergyman and his study of law. For several years he wandered about the world, stopping for a long while in India, where he said he became thoroughly imbued with the occultism of the East. He returned to this country, he declared, a confirmed theosophist.

"He remembered several of his reincarnations, he declared. In one of them he had been a woman and had a large family of children. In another he had done an injury to a young man, so, said he, he desired in this incarnation to do all he could to reimburse young men for the injury he had done them in that other life. Therefore, he asserted, he had created this trust fund."[13]

In Mr. Fullerton's final letter to the American Section's headquarters on June 11, 1913, he wrote of a decline,

My arm has improved very little, and I can hardly use my hand, certainly not in writing. I think I am steadily though slowly getting more feeble and unable to take care of myself. I shall not be sorry to depart.[14]

His death on July 21, 1913 was covered by the Associated Press and announced in numerous newspapers

NEW YORK, July 23 – The death of Alexander Fullerton, a noted student of theosophy, at a sanitarium, on Long Island Sound, Monday night, became known today. For many years he was the American secretary of the Theosophical society of which Mrs. Annie Besant was president. He was a man of independent means and he devoted his whole fortune, as well as his life, to the study and dissemination of the principles of theosophy. He traveled widely, being known in Europe quite as well as in America.. He was 70 years old and a bachelor.[15]

A. P. Warrington wrote a moving tribute to his friend:

In my quest for truth I came to you, and you gave me bountifully of your rich store of knowledge...

Warm became our friendship, deep our mutual respect. Even in the days when differing opinions bade us stand apart and raise upward differing banners, our friendship never waned, and we both still saw about our heads the higher banner that floats over all opinions alike whatever the shade or kind.

In the days when the hand of the destroyer had well nigh broken beyond repair the beautiful jar that held the lovely lotus of Theosophy, you gathered up the fragments and put them firmly together and helped the flower to grow as it never had before.

You was always clear, definite, one-pointed, never lacking in courage and depth of conviction...[16]

The Union Index of Theosophical Periodicals lists 219 articles by or about Fullerton.

Working with Charles Leadbeater, he published a book:

He also wrote pamphlets and tracts: