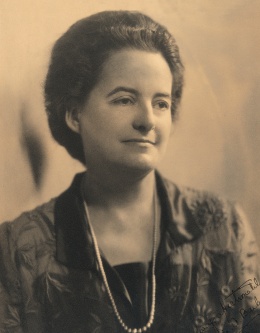 Alice Ann Latrobe Batemen Bailey (June 16, 1880 – December 15, 1949) was a teacher and writer and the founder, together with husband Foster Bailey, of a spiritual movement growing out of the theosophical tradition. She was one of the first writers to use the term New Age.

Alice Bailey was born to well-to-do parents in Manchester, England. Her upper middle class background was religious and also service oriented. Although she showed mystical tendencies, her childhood was generally unhappy: “They were for me the years of greatest physical comfort and of luxury; they were years of freedom from all material anxiety but they were, at the same time, years of miserable questioning, of disillusionment, of unhappy discovery and of loneliness.” [1]She began already at a young age to search for the world of meaning and believed that progress was rooted in mystical consciousness. [2]

Both parents (Frederic Foster La Trobe-Batemen and Alice Hollinshead) died of tuberculosis by the time Alice was eight, so she and her sister lived from then on with their grandparents in Surrey. They were educated by governesses and later attended a finishing school in London. [3][4]Their young life was completely disciplined by people or the social conventions of the time; but she and her sister were also taught to care about the poor and sick and to realize that fortunate circumstances entailed responsibility. [5]

After finishing school at the age of eighteen, following a family trend, she did religious work in the Young Women’s’ Christian Association and the Y.W.C.A. sent her to India, where she delivered strongly evangelic sermons to British troops. It was during that time that she gained experience in leadership and management. In India she met Walter Evans, an American studying for the Episcopal priesthood. They were married in 1907, and she returned with him to the U.S. where he was ordained in the Episcopal Church. The couple settled in California and had three daughters. She was a busy minister’s wife, and Bible class teacher but the marriage failed “due to his appalling temper” [6] and the couple separated in 1915 and was divorced in 1919. [7][8] 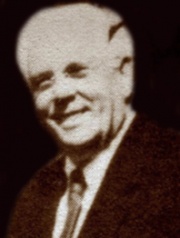 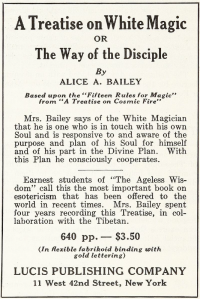 Advertisement in The American Theosophist, March 1934

In order to support her daughters, Alice worked in a sardine cannery in Pacific Grove, California and discovered Theosophy during that time at the age of 35. As Mrs. Alice Anne Evans she was admitted to the American Theosophical Society as a member on September 1, 1915. She is listed as one of fifteen founding members of the Pacific Grove Lodge (formerly Monterey Lodge) in California according to the charter dated September 17, 1915.[9] In 1918, she was admitted to the Esoteric Section.She spent the next several years working while studying the new Theosophical ideas – attending meetings, poring over The Secret Doctrine, and attempting to integrate these ideas with the strict Christianity of her upbringing. Her mystical side found certain ideas, such as the law of karma and the existence of the Masters, appealing and helpful to her during this difficult time.[10] She moved to Hollywood, California, where she at first worked in the vegetarian cafeteria of the Krotona colony. In Krotona she met Foster Bailey, national secretary of the Theosophical Society, whom she subsequently married.[11] Foster Bailey and Alice Anne Evans reached high positions within the Society - she became editor of the Society's periodical, The Messenger, and member of the committee administering Krotona.[12] They were both dismissed in 1920, when L. W. Rogers was elected President of the Society, [13] which was disappointing to both of them: “Thus, ended our time at Krotona and our very real effort to be of service to the Theosophical Society.” [14]

Mrs. Evans and Foster Bailey moved to New York, where they became members of the Central Lodge and were active for several years. On March 17, 1921, for example, Alice and Foster both sponsored Marie M. Montreuil for membership in that lodge. The Baileys participated in a panel discussion at the 1921 annual convention of the Society in Seattle. She spoke on the topic "Theosophy and the Public," and Mr. Bailey was a featured speaker at the final banquet of the event.[15] Mrs. Bailey's membership in the Society continued, with short lapses, until June 30, 1939.[16]

Even though they had established their own branch of the Theosophical Movement in the Arcane School, the Baileys kept up relationships with the other organizations, and appreciated the work of others. They advertised their books in The American Theosophist. Albert E. S. Smythe reported in 1935:

Mrs. Alice A. Bailey of New York and Mr. Foster Bailey paid a visit to Toronto on April 5, 6 and 7. Mrs. Bailey spoke in The Theosophical Hall to large audiences, that on Sunday evening taxing the capacity of the Hall, which seats 500. Airs, Bailey spoke of the surprising number of men at the meetings, as she thought. She had just returned from a long visit to England and the European Continent. It was only in Holland, she said, that she found any parallel1 to the work being done in Toronto.[17]

the movement initiated by Helena Petrovna Blavatsky was an integral part of a Hierarchical plan. There have always been theosophical societies down the ages. The name of the movement is not new but H. P. B. gave it a light and a publicity that set a new note and that brought a neglected and hitherto somewhat secret group out into the open and made it possible for the public everywhere to respond to this very ancient teaching. The indebtedness of the world to Mrs. Besant for the work that she did in making the basic tenets of the T.S. teaching available to the masses of men in every country, is something that can never be repaid. There is absolutely no reason why we should overlook the stupendous, magnificent work she did for the Masters and for humanity.[18]

When Alice was a teenager in England she had been under the supervision of a mysterious man who had visited her in person twice. She described their first encounter in her unfinished autobiography:

He told me there was some work that it was planned that I could do in the world but that it would entail my changing my disposition very considerably; I would have to give up being such an unpleasant little girl and must try and get some measure of self-control. My future usefulness to Him and to the world was dependent upon how I handled myself and the changes I could manage to make.[19]

Many years later, after she had joined the Theosophical Society and lived in Krotona, the first time she went into the Shrine room of the Theosophical Lodge she saw a portrait of this man on the wall and only then learned that his name was Master Koot Hoomi, and that he was a member of the Spiritual Hierarchy.[20][21]Her spontaneous recognition was viewed by some members of the Lodge as an effort to claim special status.[22] Bailey’s relationship to the Theosophical Society suffered more strains when she claimed reception of new communications from Masters in the theosophical tradition.

In November 1919, as she was walking in the Hollywood Hills near the old Krotona, she said she was contacted by Djual Khul, known popularly as “The Tibetan”, who wanted her to serve as his amanuensis. He began dictating to her by means of telepathy and the first book produced in this manner, Initiation: Human and Solar, appeared in 1922; it was followed by others over the next thirty years. Uniformly bound in blue they are the basic texts of the Bailey work.[23]

After leaving Krotona, Alice and Foster Bailey went to New York, where they were married the following year. In 1922, they established the Lucis Trust to publish her books. According to the Lucis Trust website, it is still today dedicated to the establishment of a new and better way of life for everyone in the world based on the fulfillment of the divine plan for humanity.

They founded the Arcane School in 1923, a training institution for students of the Tibetan’s teaching. The school has a website and trains people in meditation and service to develop their spiritual potential. The purpose of their training is to help students understand and accept discipleship responsibility and to recognize the part that they can play in the evolution of consciousness by serving humanity.
The remainder of her life was spent in writing and the administration of the School and other activities which the work of the Tibetan inspired. Alice Bailey died on December 15, 1949.

In 1937 Bailey published the prayer called The Great Invocation. Widely used in occult and New Age circles, it is very well known and associated with her name:

From the point of Light within the Mind of God
Let light stream forth into the minds of men.
Let Light descend on Earth.

From the point of Love within the Heart of God
Let love stream forth into the hearts of men.
May Christ return to Earth.

From the center where the Will of God is known
Let purpose guide the little wills of men –
The purpose which the Masters know and serve.

From the center which we call the race of men
Let the Plan of Love and Light work out
And may it seal the door where evil dwells.

Let Light and Love and Power restore the Plan on Earth.

Followers of Alice Bailey’s philosophy see The Great Invocation as a world prayer. It was translated into over 80 languages and dialects. It is said that it was given to Alice Bailey in April 1945 in a message for all people of goodwill. [24]

Perhaps as well as anything could, the tone and thrust of these simple lines suggest the distinctive ethos of the Bailey work. It clearly shares basic theosophical teaching concerning human nature. Karma, and the claimed existence of a hierarchy of a generally invisible but transcendent Masters guiding individual spiritual development and the evolution of the planet. [25]

In Hidden Foundations of the Great Invocation author John Berges details cryptographic evidence that Master Rakoczi may have authored or influenced the composing of this invocation[26].

Groups in the Bailey Tradition

Groups in the Bailey tradition have had several names, among them World Goodwill, Triangles, Meditation Groups for the New Age. World Goodwill was founded in 1932 with the purpose of helping establish right relationships among the peoples of the world; it is an “accredited non-government organization” at United Nations centers in New York and Geneva. The Triangles group was established in 1937 to create teams of three people each of whom would unite daily in a mental chain to send energy into the world. The Meditation Group for the New Age, the Group for Creative Meditation and other such works are sponsored by Meditation Groups, Inc. and are headquartered on a mountainside near Ojai, California. [27]

Alice Bailey had a great influence on Dutch artist Olga Fröbe-Kapteyn, founder of the Eranos Conferences in Switzerland.

The Union Index of Theosophical Periodicals lists numerous articles by or about Alice Bailey: 12 under the name Alice Evans and over 300 under Alice Bailey. Most of the latter were published in The Beacon, the journal of the Lucis Trust. During her early years as editor of the American Theosophical Society's periodical, The Messenger, she would have written many other articles anonymously for that journal.

All of Alice Bailey's books were published by Lucis Publishing Company, New York and London. Some of her most important titles are listed below.

These books are among those that begin with a two page Extract from a statement by the Tibetan, indicating that Bailey took mental dictation and collaborated with the distant author who wished to avoid the emotional aspects of master worship.

Among other assertions the extract states that the books 'may or may not be correct, true and useful,' and begs the reader to use the intuition and right practice to evaluate the ideas presented.