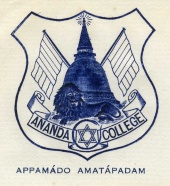 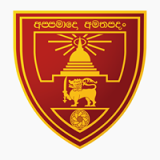 Ananda College (Sinhala: ආනන්ද විද්‍යාලය) is a Buddhist school in Colombo, Sri Lanka that accommodates over 6000 students. It was founded by Henry Steel Olcott and Sri Sumangala Thero in an effort to restore Buddhist education to South Asia. In over 130 years of operation, the school has nurtured generations of leaders for Sri Lanka. It was named after a chief disciple of Gautama Buddha.

The school was started with 37 students in Maliban Street, Colombo, on November 1, 1886, with the support of Colonel Olcott. The school was soon moved to Paranavadiya in Maradana. The name became Ananda College.

The first principal was Charles Webster Leadbeater. In 1888 he met 13-year-old student Curuppumullage Jinarājadāsa, who exhibited "keen intelligence and determination to learn."[1] During the years 1900-1901, after completing his Cambridge education, Mr. Jinarājadāsa returned to his native Ceylon to become Vice-Principal of the College. A.E. Bultjourns was principal beginning in 1889. 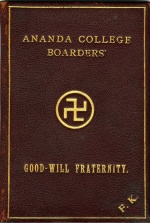 Late in 1913, Charles Webster Leadbeater sent a telegram offering Fritz Kunz a position as principal. Kunz had visited Ceylon during a world tour with Leadbeater in 1905-1906. Although Kunz was a young man of 25 years, he was well educated, energetic and hard-working, with a strong background of activity in the American Theosophical Society. Mr. Leadbeater knew him well, and had great confidence in his abilities. During the Kunz tenure as principal, from 1914 to 1917, he instituted many improvements at the school, raised funds, and supervised several construction projects. His older sisters Alma and Minna joined the school faculty to teach the youngest children. His brother-in-law Hervey Gulick, a mining engineer, introduced the sciences to the older boys. Hervey brought an Encyclopedia Britannica with him from America. It was a treasured resource that only the upper classmen were allowed to use under heavy supervision.[3][4]

After the students heard that Mr. Kunz would be departing (under pressure from the British government), the Ananda College Boarders' Good-Will Fraternity presented Mr. Kunz on March 19, 1917 with a little book with an affectionate message in beautiful calligraphy and a listing of 45 student names.[5]

Ananda College now offers 13 grades of education on a campus of over 20 acres. The student body is over 6000, with an academic staff of about 200. Students participate in many sports and other competitions with other schools. The team name is the Maroons.

The college holds an annual Olcott Oration. On November 20, 2016 the topic was "Unreasonable Success of Mathematics and Role of Information Technology in driving National Economics," delivered by Professor Rohan Attele of Chicago State University. 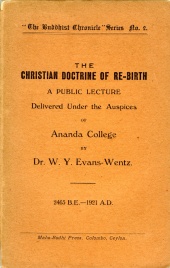 Notable Buddhists and Theosophists have visited the college over the years, and some have delivered significant lectures. One example is Dr. W. Y. Evans-Wentz, whose lecture (about 1921) was published by the Maha Bodhi Society in Colombo.