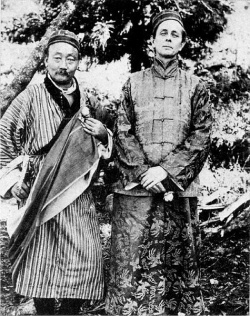 Walter Yeeling Evans-Wentz (February 2, 1878 – July 17, 1965) was an American anthropologist, a scholar of Tibetan religions, and a Theosophist long associated with the Point Loma community in San Diego. He is most famous for his 1927 publication of The Tibetan Book of the Dead and other pioneering works that transmitted Tibetan Buddhism to the West. He was a close friend of Boris de Zirkoff.

Walter Y. Evans-Wentz was born on February 2, 1978 in Trenton, New Jersey. His parents were German immigrant Christopher Wentz from Baden, and American Mary Evans Wentz. They were Free Thinkers and spiritualists. Walter joined the Theosophical Society, Point Loma in California in 1902. The Society's leader Katherine Tingley encouraged him to continue his education at Stanford University, where he earned a Master of Arts degree in 1906.[1]

The following year, Evans-Wentz went to Oxford University in England. There, following years of study and lengthy research, he earned the degree of Doctor of Science in Comparative Religion in the School of Anthropology. He was "the first American to receive this degree in Anthropology, and one of the only six to whom the degree [had] ever been awarded."[2] Oxford also awarded him a Doctor of Literature degree:

The granting of such a degree as Oxford recently [in 1931] conferred upon him is regarded as a distinct achievement in scholarship. The degree is dependent upon research, the results of which must be published at least one year prior to supplicating for the degree, and must constitute, in the judgment of a committee appointed by the University, a genuine contribution to the advancement of learning. In the instance of Dr. Evans-Wentz's research, the results were published by the Oxford University Press in the three following volumes: 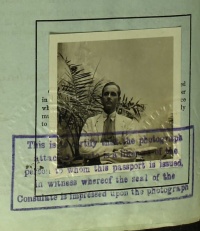 The Fairy Faith in Celtic Countries, published in 1911, a study of Celtic Mythology and religion as illustrated by modern survivors,chiefly among the peasantry of the six modern Celtic countries Ireland, Scotland, Isle of Man, Wales, Cornwall, and Brittany. To this study Dr. Evans-Wentz devoted three years while living with the peasantry in various parts of these six countries.

The Tibetan Book of the Dead, published in 1927, a translation of a Tibetan manuscript illustrative of the teachings of Northern Buddhism or Lamaism concerning the science of death, the after-death state of consciousness, and the way in which reincarnation takes place.

Tibet's Great Yogi Milarepa, published in 1928, a translation of the Tibetan biography of Jetsun Milarepa, the most illustrious of Tibet's Buddhist Saints, who was also a remarkable poet and teacher, flourishing in the twelfth century.[3]

Publication of the Tibetan works resulted from a collaboration with a Tibetan, Kazi Dawa Samdup, who performed the initial translations. Evans-Wentz revised the texts and wrote prefaces that have been criticized by some modern scholars as inaccurate. It cannot be denied, however, that in arranging to have the works published, he performed an important role in bringing Tibetan Buddhism to the attention of the Western world.

For many years, Evans-Wentz lived away from the United States. From 1907-1914 he was in the British Isles and Europe; during 1914-1917 in Greece and Egypt; and during 1917-1922 in India and Ceylon [Sri Lanka]. After that he traveled to the Straits Settlements, China, and Japan.[4] Through the 1920s and 1930s his home address alternated between Jesus College, Oxford, where he was teaching, and San Diego, California, with frequent travels to Asia.[5] During World War II he found it necessary to stay in San Diego, teaching and writing. He lived at the Keystone Hotel there for 23 years, and ended at Yogananda's Self-Realization Fellowship in Encinitas, California, dying on July 17, 1965. Passages from his Tibetan Book of the Dead were read at his funeral.[6] In addition to the Theosophical Society, Evans-Wentz was associated with the Self-Realization Fellowship and the Maha Bodhi Society, supporting all three financially.[7] 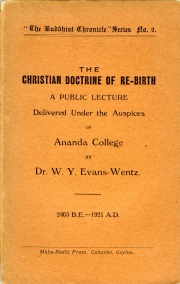 Despite his many years abroad, Evans-Wentz was well acquainted with many Theosophists in the Point Loma community and in the Theosophical Society based in Adyar. In 1918 he stayed at the headquarters of the Theosophical Society in Adyar, Chennai, India, and "had discussions with Annie Besant." He also met Alice Cleather, a prominent Theosophist living at Darjeeling.[8] While in Sri Lanka, he gave a public lecture at Ananda College, a Buddhist school founded by Henry Steel Olcott. The text was subsequently issued in a booklet by the Maha Bodhi Society.

In 1923 he returned to Point Loma for a time to work with Mrs. Tingley. He became close friends with Boris de Zirkoff, compiler of the Collected Writings of Theosophical Society founder Helena Petrovna Blavatsky, and they worked together after Evans-Wentz settled in San Diego in the 1940s. Joe and Guin Miller of San Francisco were also among Evans-Wentz's Theosophist friends. They set to music the “Six Rules of Tilopa” from his Tibetan Yoga and Secret Doctrines.[9]

The Union Index of Theosophical Periodicals list 17 articles by or about Evans-Wentz, including reviews of his books.

These are some of the books he published:

In addition, he wrote the preface to Paramahansa Yogananda's famous volume Autobiography of a Yogi in 1946.