Babu Avinas Chandra Bannerji or Bannerjee was a Bengali member in the early days of the Theosophical Society. He was a physician from Allahabad [Prayag] who attended Helena Petrovna Blavatsky during an episode of rheumatic fever.

H. P. B.'s rheumatic fever continued several days, causing her agonizing pains: the arm swelled to the shoulder and she tossed about night after night, despite the devoted and unselfish ministrations of her physician, Dr. Avinas Chandra Banerji, of Allahabad, who won all our hearts by his kindness and patience.[1]

One of those who met us at the Allahabad railway station was Dr. Avinas Chandra Banerji, who treated her in 1879 with so much devotion and intelligence when she lay tossing about in fever at the house of our friends, the Sinnetts. He was very young in the profession then, but the conduct of no graybeard Æsculapius could have been more discreet. He won her affectionate regard and my friendship and gratitude at the same time.[2]

In his commentary about Letter 40 in Letters from the Masters of the Wisdom, Second Series, Mr. Jinarājadāsa wrote:

From the Master Hilarion, received June 6, 1883. Colonel Olcott writes in that date in his Diary: “Had nice test this a.m. Couldn’t decide whether to accept invitations to Colombo or Allahabad first. Put Avinas Ch. Bannerji’s letter in shrine, locked door, instantly reopened it and got the written orders of Maha Sahib through Hilarion in French. Done while I stood there and not half a minute had elapsed.” The Master H. was in Bombay on February 19, 1881, when He visited both Founders: Colonel Olcott thus writes in his Diary: “Hilarion is here en route for Tibet and has been looking over, in, and through the situation. Finds B — something morally awful. Views on India, Bombay, the T.S. in Bombay, Ceylon (—), England and Europe, Christianity and other subjects highly interesting.”[3] 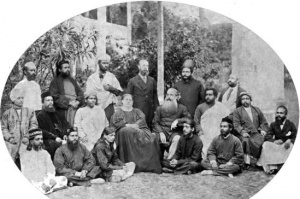 1882 T.S. convention in Bombay; Abinash Chandra Bannerji is second from the left in front

Several other early Indian members may have been related to Dr. Avinas Chandra Bannerji.