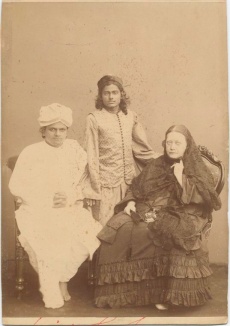 Babaji with T. Subba Rao and H. P. Blavatsky
Babaji (also known as M. Krishnamachari, S. Krishnamachari, S. Krishnaswami Iyengar or Aiyangar, and Darbhagiri Nath) was a young Maratha Brahmin of South India. He was at one time a clerk in the Collector's office in Nellore. In the early 1880s, after the arrival of the Founders to India he joined the staff at the theosophical headquarters in Bombay and assumed the name of "Babaji" (also spelled "Bawajee" or "Bowajee").[1] A few months after this he became a probationary chela of Mahatma K.H., assuming the mystery name Dharbagiri Nath.[2] The Master frequently referred to him as "the little man", due to his small stature. Babaji was present at the time of the Hodgson Report at Adyar.[3] He eventually failed as a chela and died in India in obscurity.

In late 1882 Gwala K. Deb (an accepted chela of the Master K.H. whose mystical name also was Dharbagiri Nath) was to travel to Simla from Darjeeling to deliver a letter from Mahatma K.H. to Mr. Sinnett. However, Deb could not leave Darjeeling, since his physical body was being prepared for a certain occult work and could not be contaminated with the magnetism of the world. Babaji was then asked to allow him to use his own body on certain occasions, in order to perform the allotted task.[4] In one of his letters, Master K.H. wrote to Sinnett:

And now good-bye, I ask you again — do not frighten my little man; he may prove useful to you some day — only do not forget — he is but an appearance.[5]

It seems that after this event he started to use the name Dharbagiri Nath publicly, which produced confusion in the minds of some members between the accepted and the probationary chelas. Mme. Blavatsky wrote to Mr. Sinnett:

He has as much right to call himself Dharbagiri Nath, as “Babaji.” There is—a true Dh. Nath, a chela, who is with Master K. H. for the last 13 or 14 years; who was at Darjeeling, and he is he of whom Mahatma K. H. wrote to you at Simla. For reasons I cannot explain he remained at Darjeeling. You heard him ONCE, you never saw him, but you saw his portrait his alter ego physically and his contrast diametrically opposite to him morally, intellectually and so on. Krishna Swami’s, or Babaji’s deception does not rest in his assuming the name, for it was the mystery name chosen by him when he became the Mahatma’s chela; but in his profiting of my lips being sealed; of people’s erroneous conceptions about him that he, this present Babaji was a HIGH chela whereas he was only a probationary one. . .[6]

[I]f he had the right to call himself Dharb. Nath he had no right to abuse of this position by assuming an attitude which only the real Dh. Nath would have the right to assume, and which he never would, however . . . he took advantage of the position assigned to him temporarily — to harm me and the Cause, and several Theosophists, who see in him the real, instead of the reflection of Dh. N. the high chela.[7]

Failure as a disciple

In February 1885, he accompanied Mme. Blavatsky and others to Europe and was devoted to her. But in 1886 he turned against her, accusing her of desecrating the Masters’ names by connecting them with psychic phenomena. He caused much trouble in theosophical circles in Europe and England, especially at Elberfeld with the Gebhard family. Babaji exercised considerable influence over Frank Gebhard and other theosophists, largely because he was a Hindu claiming to be an advanced chela.[8]

In a letter dated June, 3, 1886, written by Mme Blavatsky to Col. Olcott from Elberfeld, Germany (and originally published in The Theosophist, Vol. LII, No. 11, August, 1931, pp. 673-675) she writes: "And now since he came here he said to my face before all the Gebhard family that I knew nothing of the esoteric teaching; Isis was full of ludicrous mistakes; my Theosophist articles likewise".[9]

Eventually, Babaji failed to remain a chela. Mme. Blavatsky wrote to C. W. Leadbeater, who at the time was a chela of Mater K.H.:

[Babaji] was sent to Simla to Mr. S, that is to say, he gave up his personality to a real chela, Dharbagiri Nath, and has assumed his name since then. As I was under pledge of silence I could not contradict him when I heard him bragging that he had lived with his Master in Tibet and was an accepted regular chela. But now when he failed as a “probationary” owing to personal ambition, jealousy of Mohini, and a suddenly developed rage and envy even to hatred of Colonel and myself – now Master ordered me to say the truth.[10]

When this letter was in transit, the Master K.H. precipitated: "The little man has failed and will reap his reward".[11]

Babaji returned to India and eventually died in obscurity.