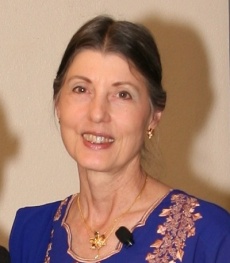 Betty Bland served the Theosophical Society in America in many capacities and was President from 2002 to 2011.

Betty A. Bland was born in Richmond, Virginia on April 25, 1941. In 1961 she married David Horton Bland. She completed her BSHE (home economics) degree from the University of North Carolina at Greensboro in 1962 and was inducted into the Omicron Nu Honor Society. Mrs. Bland worked for the 4-H system in Granville County, North Carolina; then for the Employment Security Commission as an Employment Interviewer; as a Counselor for the Neighborhood Youth Corps in Durham, North Carolina; and as a Financial Aid Officer for a school’s federal aid scholarship program. She and David have a son and a daughter.[1]

In 1968, Mrs. Bland had a near-death experience, which is related fully elsewhere. In brief, an error during a simple surgery resulted in several days of hovering near death, followed by a life review with the "Council of Light" and eventually a choice to return to the earth plane. She wrote, "The Near death experience transformed my outlook and approach to life. No longer complacent, I was catapulted into an intense quest for understanding, seeking out new ideas, meditating deeply on my own motives, an drastically changing my interactions with life. Death had no sting; the grave had no victory; life was merely a game, a classroom; but life was to be lived with a fervent intensity. Nothing matters, but everything matters![2] 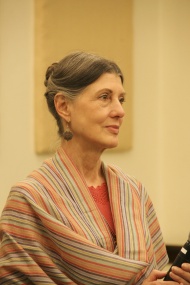 Mrs. Bland joined the Theosophical Society on April 30, 1970. She helped to establish the Mt. Gilead, North Carolina Study Center, serving as its Secretary. When the family moved to Lansing, Michigan, Betty helped to revive the Study Center there, once again serving as Secretary, and participating in the Michigan Federation. After returning to North Carolina in 1974, she formed a new Study Center in Raleigh.[3] In 1975, Mrs. Bland became a candidate for the office of ________ She served as Vice President ________ . For many years she has been active in the Theosophical Order of Service and the Theosophical Book Gift Institute. During the summers that the Society had its annual convention at Lake Geneva, Wisconsin, the Blands attended as a family.

Under Betty Bland, the headquarters estate of the Society was renovated and administrative structure and procedures were modernized. The TSA weathered the national financial crisis 2008, but had to reduce staffing. The website of the Society underwent two major redesigns during Mrs. Bland's 9-year tenure. Logos were modernized for the Society and for Quest Books. The TSA experimented with Spanish-language web content and increased the audiovisual and textual content greatly. Many other technological upgrades took place during the Bland years: improved audiovisual equipment and computers; new wiring in the server room; and a new telephone system. Another innovation was an Internet discussion group called the Theosophical Community, and an important new offering was an E-newsletter that has grown to having a large readership.

A Capital Funds Campaign raised over two million dollars to finance many improvements and also established an endowment in support of programming. Betty's husband David provided great leadership in the execution of most of these projects.

Improvements to the headquarters estate under the Blands' teamwork included: 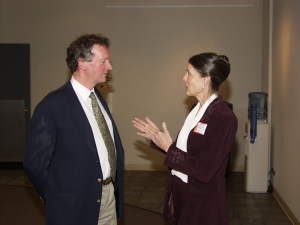 The Bland administration experimented with different forms of recruiting new members, as membership rolls had been declining gradually. The Olcott Institute was discontinued, and the schedule of national speakers was cut back somewhat. Instead, Kern Lectures and regional conferences were planned with the intention of drawing interest by using nationally known speakers to address special topics: 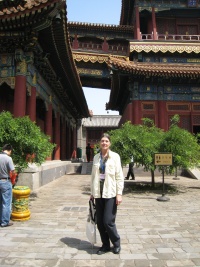 During the Bland years, the Society sponsored two trips to Tibet in 2007 and 2008; sponsored workshops for Post-Traumatic Stress Disorder with Dr. Ed Tick; and hosted an Inter-American Federation Conference in 2008.

David Bland managed the Theosophical Publishing House, and put it on a more businesslike footing. He also reached out to the public, becoming president of the Wheaton Chamber of Commerce. He involved the Society in local festivals and events, and arranged for the Rogers Building to be used as a polling place in elections. 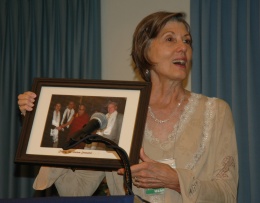 In addition to some financial bequests, donations came in other forms. In 2005, the family of Fritz and Dora Kunz offered to donate their papers, art, photographs, and audiotapes, so David and Betty drove to Seattle to collect the materials. With a grant from the Sellon family, Mrs. Bland hired a professional archivist to process the valuable collection. When a Montana member offered two spectacular pieces of petrified wood from his ranch, the Blands drove west to receive the gift.

In 2010, Mrs. Bland arranged for an audience with the Dalai Lama when he was speaking in Iowa. She drove with her husband David and Tim and Lily Boyd. That meeting led to a visit of the Tibetan Buddhist leader to Chicago for a series of interfaith events that drew more than ten thousand people and raised over $400,000 for Tibetan charities.

Among her many other activities, Mrs. Bland lectured at lodges, study groups, and federation meetings. In 2006, she delivered the Blavatsky Lecture in England, on the subject of "The Virtuous Key."

She and David were always ready to participate in the fun aspects of headquarters life, as well. They demonstrated their proficiency at dancing at a staff sock hop and participated in skits during summer conventions. Betty dressed as Elvis Presley at one staff party, and as Dolores Umbrage (from Harry Potter) at another. 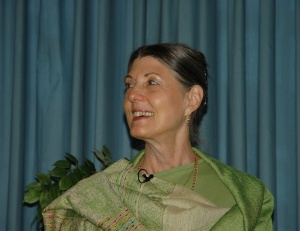 Mrs. Bland and her husband retired to North Carolina in 2011. They have a son, a daughter, and two grandchildren. Betty has started a study center and David continues to be active in social justice issues. Both are involved in Co-Freemasonry.

It is traditional for each President of the TSA to act as Editor in Chief of the national periodicals, and Betty Bland edited Quest magazine and the Messenger member newsletter. She wrote regular columns in each. The Union Index of Theosophical Periodicals lists over 150 articles by and about Betty Bland. Many are available at the Quest web page. These are examples:

Many of Mrs. Bland's lectures were preserved as audio or video recordings, and are available from the Henry S. Olcott Memorial Library or the Theosophical Publishing House. These are some of the titles: